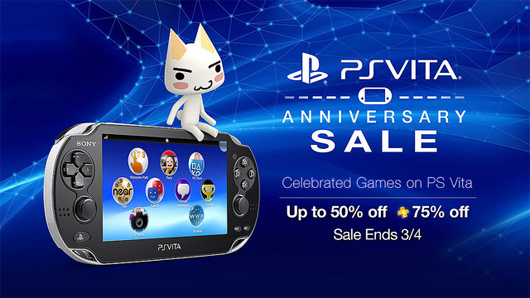 Are Vita Owners Giving Up?

This past February marked the 3 year anniversary of Vita’s life in the west. 3 years on the market, barely a modicum of support in the last one, and not much more the year before that. We had Freedom Wars last year, the so-called “AAA” title according to president of Sony Computer Entertainment, Shuhei Yoshida…and that’s the only title that comes to mind which is actually a first party exclusive and isn’t a lazy rehash. Where’s the uproar? From where I’m standing it is as if gamers have let Sony off the hook. Go to any Vita discussion board and within just just a few minutes of scrolling through you will see a multitude of upset vita owners who express how they feel betrayed, deceived and ignored-but it isn’t anger or determination you will see, rather you will see exasperation and cynicism. They have come to terms with the current situation. Do vita owners have no fight left in them? Are they really throwing in the towel already?

The problem is that Sony are not listening. The same way, if a tree that falls in the wood with no one around to hear it, might as well make no sound, the general consensus from the Vita gamer community is not that they don’t want improvement, the tree has definitely fallen, but they have learned that petitioning or being vocal is fruitless because no one is listening.

The Vita is struggling and failing to deliver on its promise of being a handheld equivalent to the PS3, in terms of game quality. Time and time again, games that could have turned the tides like Bioshock and InFamous, fell of the radar or were cancelled. But what about Call of Duty: Black Ops Declassified, Resistance: Burning Skies, Borderlands 2 and Assassin’s Creed: Liberation?

These are the kinds of games I-and many others- bought the Vita for; games that are from these renowned and critically acclaimed AAA franchises, synonymous with the Playstation brand. Well, not only are games of this caliber few and far between on the system, but they each range from lazy to uninspired, to laggy and just plain unplayable. They barely resemble the franchises they are spun off from. I won’t pretend I didn’t find some enjoyment in these titles, but at best they are a lesser or an inferior equivalent that barely do justice to their titles.

I don’t think there is any doubt that Killzone: Mercenaries and Uncharted: Golden Abyss are excellent games that are worthy additions to their series. But what happens when you complete that 12-hour long third person shooter released in 2011 and that 5-hour long first person shooter released in 2013…? Well, my friend, then you enter the realm of independent games. You didn’t ask for them, perhaps you didn’t even want them, but you’re damn well going to put up with them because that is all that Sony have left for you.

Seriously, Yoshida, oh mighty president of Sony Computer Entertainment, where are the AAA’s and first party games? He has stated: “I do realise that some people are only interested in big-budget AAA games. I don’t really understand those people”. But surely your job is to understand and appeal to these people, as they are your target demography for the system? “People want those big-budget, realistic, military shooters” So why don’t you bring out what people want? Clearly you don’t understand what those people want, which would explain why you are seeing a dip in Vita sales and why the PSP had been thriving by this point in its life, partly thanks to some excellent exclusive; Grand Theft Auto, Syphon Filter, Metal Gear Solid, Monster Hunter, Final Fantasy, and many other AAA games. Surely you can see why there are legitimate concerns of the consumers who, may well have an appreciation for indies, but expected at least a little support from the company who made the system, but it’s fallen on deaf ears and they have figuratively-speaking just covered their ears, going “lalalalalala”.

Have I skimmed over a significant portion of Vita’s library? Guilty as charged. But if you discount all the games that are remasters or ports, then indies are mostly what you are left with. That and Playstation classics from PS1 and PSP, some of which were bundled with the system and the memory cards (I guess that Sony didn’t believe they would be selling a vita to any ex-PSP owners, any of the 80 million of them, because that would be so unlikely).

The worst part is we do not know what Sony has planned for Vita- in fact, let me rephrase that. We don’t know if Sony has anything planned for the Vita. From the lack of marketing, a glaring lack of first party support and an extremely telling deficiency in exposure at major games conventions…we are just all left in limbo, all left to assume our fate.

Am I saying the Vita is a terrible system? Not at all, I love this system with every fibre of my being. But is expecting a few more big titles from the people that encouraged me to buy the system, really asking for too much?

The vita just seems like such a wasted opportunity, and it’s not as if they’ve been up front that they wanted to end the Vita and bring out the next generation of Playstation Portables. At least then we would know where we stand, and could make an informed decision on whether it would be sensible to sell our vitas. I am told more is wasted by indecision than wrong decision. Sony, make up your minds.

Steve belongs to a species of gamer whose natural habitat is England. He is a rare animal that is most commonly found hibernating in front of a tv with a controller in his hand. Occasionally he is spotted at the pub with the rest of his pack (he's definitely the alpha male). He makes growling noises while playing guitar, to show dominance. He's a dangerous mammal that will rip a game to shreds if it rubs him the wrong way, but he's a lovable creature at heart that likes hugs and pizza.
@acraftyape
Previous Tattoos Won’t Ruin Your Apple Watch
Next Steam Greenlight Spotlight: Gridberd