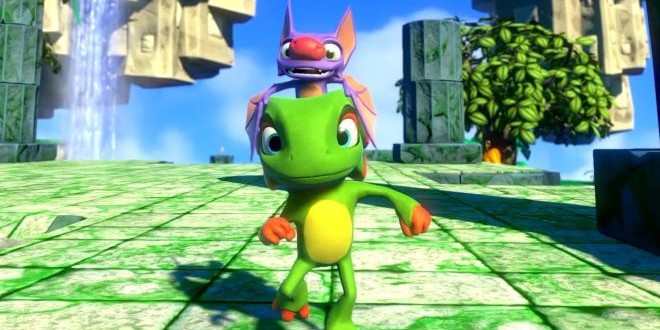 Playtonic Games have announced that their first project will be titled “Yooka-Laylee,” and they’re dubbing it the spiritual successor to the popular Banjo-Kazooie franchise. The studio, formed by a handful of ex-Rare developers, have also said that the game will be available on Windows, Mac, Playstation 4, Xbox One and Wii U. Depending on the success of it’s Kickstarter campaign, Yooka-Laylee’s release date may be the same on all of these platforms.

Banjo-Kazooie and its sequel Banjo-Tooie are regarded by many as some of the best ever examples of the 3D platforming genre. Fans have been crying out for any kind of news regarding the third entry in the main series, Banjo-Threeie, since 2000 when it was teased in Tooie’s final cutscene. However, following Microsoft’s acquisition of Rare in 2002 and a disappointing instalment on the Xbox 360 in 2008, we are yet to see a true follow-up from the distinctive bear and bird duo. Since the buyout, Rare’s main focus has been on producing sports game for the Xbox’s motion sensing Kinect cameras. A number of members from the original team at Rare have clearly been unhappy with the shift in focus, and have now broken away to form a new, smaller studio by the name of Playtonic Games.

Originally referred to as “Project Ukelele,” Yooka-Laylee follows the exploits of two brand-new characters from the mind of Steve Mayles. Yooka is a bright green chameleon (with no pants), and Laylee is a bat (with a big nose). Playtonic have stated that these two characters were designed with their abilities in the game in mind. For example, Yooka will have a tongue grapple move and will presumably have some sort of clamouflaging capability, whereas Laylee has a ‘tactical sonar blast’ in addition to other skills. What is clear from the first batch of artwork that’s been released, is that these new characters boast the same unique charm as the developers’ previous creations.

Yooka-Laylee’s Kickstarter campaign kicked off yesterday at 5:00pm BST. It has been reported by IGN that it took only 40 minutes for the project to reach its funding goals and it now has six times more than the originally requested amount behind it. There is no concrete release date for Yooka-Laylee as of yet, but its Kickstarter page says that Playtonic are aiming to have it out by October 2016.

I’m Load The Game’s co-founder and community manager, and whenever I’m not answering questions on social media platforms, I spend my time digging up the latest news and rumors and writing them up. That’s not to say I’m all work and no fun, not at all. If my spare time allows it, I like to engage in some good old fashioned online carnage. If it’s an MMO with swords and lots of PvP, I’m most likely in it. Oh, and if you’re looking to pick a fight in Tekken or Mortal Kombat, I’ll be more than happy to assist! Connect with me by email markjudge (@) loadthegame.com only
@@MarkJudgeLTG
Previous The Last of Us offering standalone DLC
Next Windows 10 Coming to Xbox One