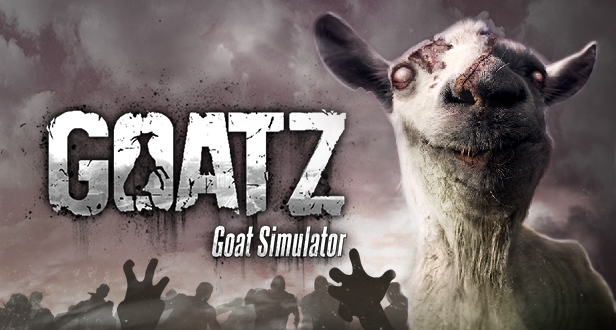 If you’ve ever wondered what it’s like to be a goat, then you’re probably familiar with Goat Simulator. It’s the only game that I’m aware of that allows you to experience things from the perspective of a goat. So, after sampling the game and experiencing what I can only assume to be an accurate depiction of an average day in a goat’s life. It seems some were left wondering, how would that poor goat’s day change if it were to coexist with zombies? Coffee Stain Studios have set out to find answers to that question. There second DLC pits goat against zombie.

In keeping with the company’s tongue-in-cheek style, GoatZ is their own rendition of the currently popular survival type games. They boast that it will be Steam’s only survival game that isn’t currently in Early Access with just as many bugs, if not more, than the competition. If you’re familiar with Goat Simulator, I’d be tempted to say that there will probably be more – it’s part of the game’s charm.

PC Gamer has provided the game’s add-on feature list. GoatZ will, of course, feature zombies wandering around in a “pretty big new map with some stuff in it;” which should excite fans of the series with the chance to explore a new area. The game will also provide a crafting system, several different weapons, and a survival mode that requires you to eat every five minutes. You can get a taste of some of the new features in their announcement trailer; as well as a few unmentioned extras, such as the fire breathing elephants, because why not?

GoatZ looks like it’s going to be another fun filled, buggy, goat adventure. This time with guns and zombies. Goat Simulator was recently released on Xbox 360 and Xbox One, but there is no information yet on a release for GoatZ on consoles. Anyone wishing to fight off zombies as a goat will be happy to hear that the DLC add-on will be releasing for PC on May 7th. It will also be released as a separate app for Android and iOS. GoatZ will be available as an app and on PC for $5.

Hi I'm Daniel and I'm an aspiring writer, avid gamer, and wanna-be cook; I'm not quite certain in which order. I like all things RPG and if that means swords n' spells, all the better. But, provided it has a good story I'll probably want to try it regardless of what it is. I'm a Windows junkie, and I spend my time gaming on Xbox, PC, and my 2DS.
@@danielcooper179
Previous Lenovo’s New LavVie Z Laptop: A Lightweight to rival the MacBook?
Next Happy Wars on Xbox One: First Impressions