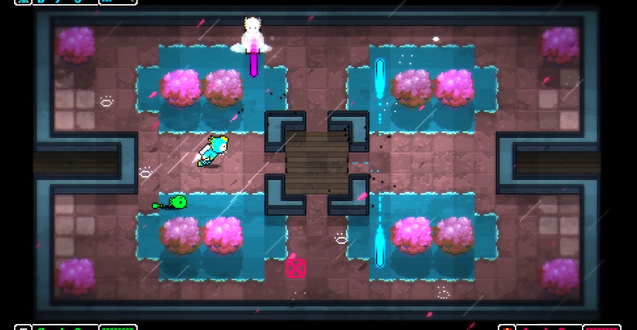 Today’s Greenlight spotlight is on Invisagun Heroes, a multiplayer battle game with a unique twist. My group of friends and I are always looking for some new party games to play, so I always jump at the opportunity to add a new game to our collection. While games like Gang Beasts and Towerfall: Ascension are staples in our local gaming time, I could definitely see Invisagun Heroes being a solid addition to the list of games that we play locally. The interesting aspect of Invisagun Heroes is also the game’s most unique twist: all of the players are invisible.

Having players be invisible definitely sounds ridiculous, so I found myself increasingly curious as to how this mechanic would actually work in-game. I felt that having no clue where your character is at any given time would cause not only confusion, but frustration as well. The counter to the confusion of invisibility is predictable movement patterns that ensure that all characters know where they are at any given time, but other players will be unable to pinpoint their opponents’ locations. The game also features various tells through environmental effects such as footprints, which will easily give away the positions of yourself or your enemies. 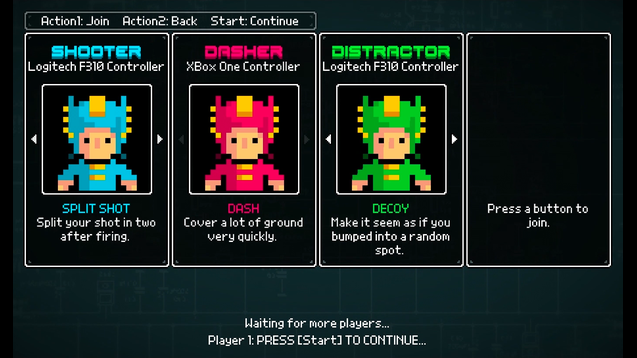 On top of having various environmental tells, Invisagun Heroes also features numerous special abilities for your character to use. Each of these abilities, along with firing your weapon, will produce powerful effects, but will also give away your position to your enemies. This creates an interesting risk-reward situation, and gives a little bit of spice to the game. Invisagun Heroes is a game that rewards deception and stealth. The more clever the player, the better they will perform in the game.

Invisagun Heroes features a large and diverse variety of maps, which are spread across numerous planets. This gives each map a unique look, so you will never feel like you are playing on the same maps over and over again, unless you choose to do so, of course. The earlier-mentioned environmental tells are also different on each map, and include things such as scattering birds, environmental hazards, and doors that open only when a player is within a certain range. This means that you must be extra careful when navigating the map in order to ensure that you do not give your position away, which will certainly mean instant death. 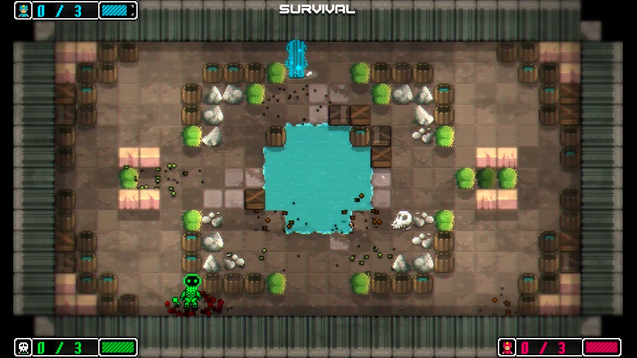 Featuring four unique game modes, Invisagun Heroes is attempting to keep players interested in the game for a long period of time. Survival mode awards points for each character that is left alive at the end of the round. Hunter mode awards a point for each kill that a player achieves. Zone Control mode has players attempting to hold down various control points for as long as possible, and awards points based on how long an area was held down. Finally, deadline mode awards victory to the player with the most kills within a set time-limit.

When you and your group of friends are looking for a new competitive multiplayer game to add to your gaming nights, have a look at Invisagun Heroes. You can find it on Steam Greenlight, where you can leave a vote as well as some constructive feedback if you’re interested in seeing the game on Steam. Nothing strengthens a friendship more than the shouting that ensues from local multiplayer games, and Invisagun Heroes is no exception to this rule.

Edit: The game also features online multiplayer. I seemed to imply that it was local only, so my apologies for that.

I enjoy playing pretty much any type of game out there. My passion lies in finding the gems of the indie gaming world. When I'm not playing games, I'm programming them, at the gym, or tending to my small army of cats. Writing has always been a part of my life and I'm grateful for the opportunity to get my content out there for people to see.
@spf0227
Previous Lego Dimensions Level Packs Leaked?
Next Space Beast Terror Fright: The Alien Game We’ve Been Waiting For