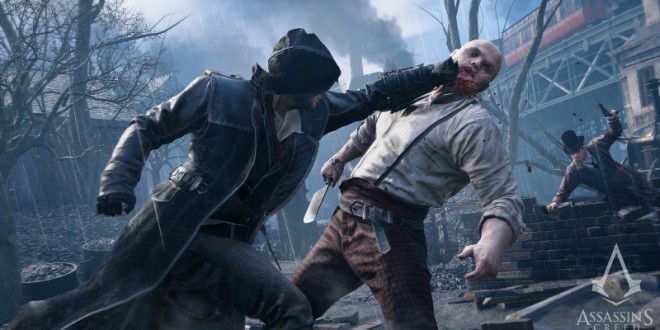 My favorite thing about Assassin’s Creed: Black Flag was the ships. They were great. My second favorite thing was the pirate stereotypes. From the looks of the gameplay demo for Assassin’s Creed Syndicate, which can be found below, I’m only going to be half disappointed by the latest installment in the series. There’s disappointingly little evidence of ships but the stereotypes? They’re ten a penny.

According to an announcement by Ubisoft, made via a livestream, Assassin’s Creed Syndicate will launch on October 23 on Playstation 4 and Xbox One.  The PC is to get a release at some later date in the fall – doubtless after the game has been delayed repeatedly by Ubisoft for reasons that will never made fully clear. Set in Victorian London in 1868, players will take on the role of either Jacob or Evie Frye, brother and sister assassins, and try to build up an underground gang to defeat the Templers. Men in flat caps, inconsistently cockney accents and people saying words like “Blighters” (apparently one of the city’s gangs) are among the treats that can be expected. Ubisoft also released a lengthy blog post offering further details of the game, which confirmed many of its main features. Choosing either Jacob or Evie will demand different play styles, which, according to the game’s Creative Director, invoke different sides of the English persona. (Apparently the English persona is a combination of stealth and brawling).

Ubisoft Quebec have taken charge of the series for the first time. Responsible for the Wii version of Prince of Persia: The Forgotten Sands (actually a solid iteration of the game), they also had a smaller hand in the development of many of the previous Assassin’s Creeds. A lot of continuity with the earlier games can probably be expected, then, from Assassin’s Creed Syndicate. Possibly too much for gamers like me, who slid off them like cats at their first ice skating lesson. New tools and weapons that can be seen from the gameplay footage, like a rope launcher that can be used to scale walls and to zipline between buildings, may not be revolutionary but could be the extra edge that the series needs.