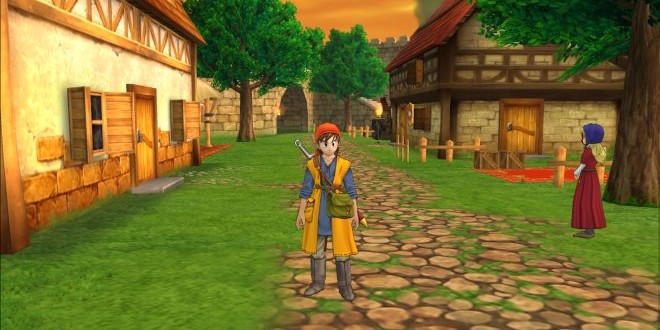 Dragon Quest VIII: Journey of the Cursed King was released for the PlayStation 2 in 2004 (Japan) / 2005 (North America). It was a well-received title, and many fans hold it in high regard as one of the best games in the Dragon Quest series. Square Enix recently announced that Dragon Quest VIII will be coming to Nintendo 3DS in Japan on August 27, 2015 for ¥5,980.

As you can tell by the solid year that it took the original release of Dragon Quest VIII to make it to North America (the game took an extra year to make it to the EU and Australia), Square Enix doesn’t exactly have the best track record when it comes to localizing Dragon Quest games – Dragon Quest X still hasn’t been released outside of Japan despite launching on the Wii back in 2012.

Hopefully, Dragon Quest VIII will be different. It is quite an important title for the series. The game was the first title in the main Dragon Quest series to be released in Europe, and it is also available on iOS and Android devices worldwide. Already having a worldwide presence makes it more likely that we’ll see the 3DS version outside of Japan.

Even so, fans have been hesitant to get excited about the new version of Dragon Quest VIII. Even if the game does make it outside of Japan, it’s likely that it might take at least a year. Meanwhile in Japan, the series is seeing a tremendous amount of success. After a typically strange ad campaign in Tokyo’s Shinjuku Station, Dragon Quest Heroes: Yamiryuu to Sekaiju no Shiro (The Dark Dragon and the World Tree Castle) went on to sell over 594,000 copies across the PS3 and PS4 platforms in its first week, making it the best-selling PS4 game in Japan that wasn’t a part of a hardware bundle. We certainly hope that Square Enix will see the potential value in releasing the title outside of Japan, but there is no reason to come to a conclusion (either way) yet.

Would you like to see Dragon Quest VIII on your Nintendo 3DS? Let us know in the comments and keep checking back with Load The Game for the latest video game news.

I'm Aria! When I'm not doing other things, I'm either playing video games or writing about them. If you like games, anime, and random stuff, you can follow me on Twitter @Sage0fForest
@@Sage0fForest
Previous Assassin’s Creed: Syndicate Will Have a Female Protagonist – Don’t Celebrate Just Yet
Next Ekko, A New Champion Revealed for League of Legends