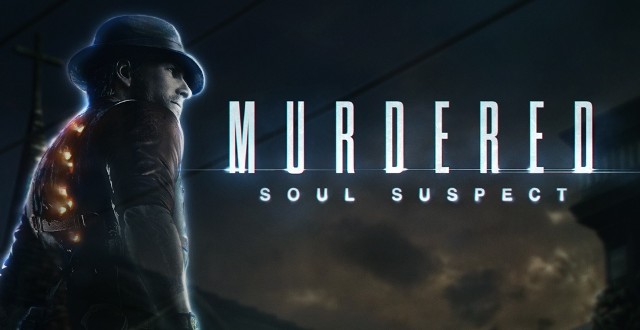 Some games get unfairly slated by critics at the time of their release, with reviewers focusing more on technical deficiencies rather than humour, story-telling and soul. A game like Deadly Premonition which was bashed in the media at its time of original release for Xbox 360 is a prime example. The game was a clunky mess, but had a story and characters that helped it transcend its archaic combat and dated graphics, to create a game that garnered a huge cult following, helping it gain the unofficial tag of Twin Peaks the game. Murdered: Soul Suspect is a game that appears takes influence from Deadly Premonition, but ultimately fails to deliver on them the same way its predecessor did.

Soul Suspect is a detective game, where main character, Ronan O’Connor hunts for his murderer, the serial killer cryptically known as, The Bell Killer. Ronan looks and acts like he’s been lifted straight from a Raymond Chandler novel, fedora and all. As an ex-con, Ronan miraculously becomes a reformed policeman, covered in prison tats. I mean I’m no recruitment officer for a police department, but I’m pretty sure ex-cons are generally overlooked as viable applicants. Nepotism is clearly an issue in Salem, as Ronan is hired by his brother-in-law, the high ranking Rex. Using all his criminal know-how, Ronan becomes a useful tool for the SPD, until his superior detective skills see him chase down a known serial killer into an empty house, where he meets his untimely demise. It is from here the game tries to set itself apart, Ronan witnesses his own death and finds himself struck in Salem in spirit form until he solves the mystery of his murder and the identity of the serial killer.

Most of the gameplay comes down to you walking around a crime scenes “looking” for clues. I use the term looking very loosely here, as most of the time you walk around until some random item prompts you to press a button to investigate the evidence. 90% of the “clues” are useless and feel like a way to pad out the investigation gameplay. The list of clues and evidence for each crime scene are completely arbitrary, and you are normally required to gather 10-15 pieces of evidence before you can attempt to solve the crime. For example the opening crime scene is of Ronan’s murder, an event he has just been a victim of moments before, yet you are still required to walk around the crime scene, clicking on broken glass, to deduce, you were thrown from a window. The game is made in such a way that it assumes all its players are idiots, incapable of deducing the simplest of puzzles. When you eventually click all the of evidence, you need to piece the most relevant parts together to solve the crime. This requires you to choose the three most pertinent pieces of evidence to solve the crime. But selecting the wrong ones carries no penalty; instead they are greyed out so you can’t make the same mistake again. It feels like a cheap man’s La Noire.

While the bulk of the gameplay revolves around the crime scene “investigations”, there are some additional variations of gameplay in the form of forced stealth sections. There are areas that require Ronan to avoid demons that can pull him into hell. This requires you to jump between spirit residues to avoid their gaze, allowing you sneak past, or to get behind them to perform a stealth take-down. These areas are extremely tedious, and most of the time I would simply run past, rendering the entire section pointless. Then there are stealth sections involving your human sidekick, Joy, a medium that is able to communicate with and see Ronan. These stealth sections are much more enjoyable and can’t be solved by you holding the sprint button. They take the form of a puzzle, where you have to possess items to draw the attention of patrolling guards to allow Joy to sneak by. These sections offered the most enjoyable gameplay of the entire experience, but they were too few and far between.

There are also optional side quests, but these offer no difference from the main story in terms of gameplay mechanics. These optional side quests will probably add another hour or so to the meagre 6 hour story, but I had no urge to play them. There are also collectible items scattered throughout the world, but the game requires you to uncover too many of them around the levels to unlock the optional back stories, making it another tedious process. These aspects feel like they were just tagged on at the end to give the pseudo open world a bit more in the way of content, but it just serves to show the game has been rushed.

The story does its best to hit every cliché in the paranormal crime, thriller genre. Ronan is a hard-boiled, cigarette smoking detective, with a dark and troubled past, but his back story is not fleshed out enough for you to care. We are given very little detail about Ronan’s criminal past, or how he managed to get a job in the police force. Similarly we get very little information about his wife’s death. We are just expected to care and want to help Ronan get closure so he can be with his wife in the afterlife. It is lazy storytelling, with the big twist being telegraphed from the outset. The arc involving Joy is poor too. She is hunting for her mother, another medium who had been assisting the police with their investigations only for her to disappear suddenly. The writers try to paint Joy as a young woman with an attitude, who is only out for herself. But it feels contrived and her story is bland and wrapped up in a sentence towards the end. It takes master detective Ronan almost three quarters of the game to realise that the ritualistic murders in Salem, are connected to the Salem Witch Trials. It is these inconsistencies with character building and storytelling that make the story feel rushed and like it was an afterthought. The story telling tried to take influence from, Deadly Premonition, but rather than focus on the main protagonist and his internal thoughts, you get flavour by possessing civilians and reading their minds. This can be humorous as you listen to two people chatting away for them to be thinking something completely different. While there is no central narrative to these sections they certainly do more to create a world than the story does. If the writers had bothered to give Ronan and Joy a little more depth and more back story the narrative would likely be a lot better and would carry the game a lot more, unfortunately like with most aspects of this game it feels tired, rushed and underwhelming.

Graphically the game looks like a poor Xbox 360 game. Textures are bland, character models are clunky and environments are samey and unoriginal. The impression you get from the presentation is that the developers ported a game originally intended for last gen, which was ported quickly to the current generation for quick cash in due to the lack of content on the Xbox One and PS4 early last year. The graphics of Ronan’s face are good, but that only serves to emphasise how poor the rest of the graphics are through the experience.

The negative reviews at launch were pretty much on the button, even taking into account the amount this game is currently available for. I paid £4.99 for the PC version, with console version being available for £15.00/$20.00, but even at the PC price I felt short-changed. This game could have been so much better than the under baked game that was released. Some of the concepts are good in theory, but unfortunately they are not explored enough to make them feel rewarding. Whether this was a last minute port to current gen, or a game rushed out when console gamers had little options for new games, is still unclear. From the outset I got the impression the developers were attempting a Deadly Premonition type game, with strange goings on and clever, witty characters to help you get through the substandard gameplay. Unfortunately Soul Suspect just serves to show games like Deadly Premonition are a one off, which cannot be replicated, and some games receive bad critical reviews at launch because they’re just plain, bad. Do yourself a favour and save your money, put it towards paying someone to pull your toenails out with pliers because that will probably be more enjoyable (or wait to see if the next Bargain Bucket is more deserving of your money).

A masochistic game reviewer, taking pleasure in games that beat me into submission regularly.
Previous Two New LG Mid-range Devices Announced: The G4 Stylus and G4c
Next Battleborn Projected To Release In 2016 – Will Come To E3

Airtight Games, the development studio behind the recently releases Murdered: Soul Suspect has shut down ...