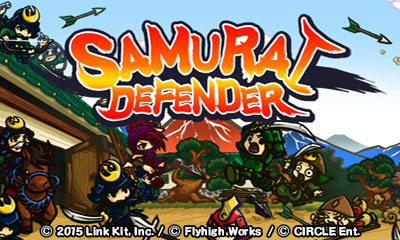 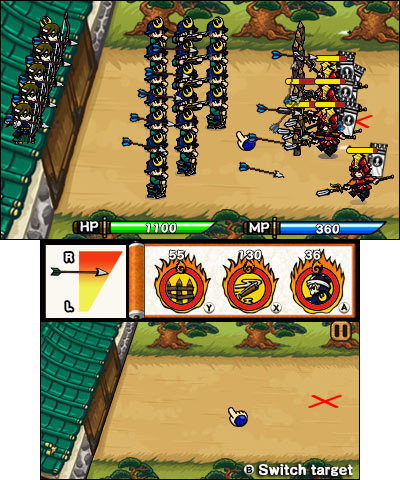 From the game’s official Nintendo page: “Samurai Defender is a simple defense type action game set in the Warring States period of Japan.” The key word here is “simple.” The game is extremely simple, with your goal being to defend your castle from waves of enemies who seek to break inside. Their appearance may differ from wave to wave, but both their intent and yours is always the same: they want to get in, and you want to keep them out. 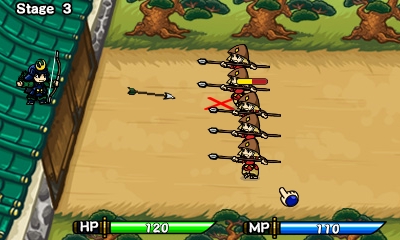 You’ll accomplish this by using the touch screen to direct arrows at your enemies. In addition to your archers, you also have “schemes,” which are basically abilities. These include things like sending troops onto the ground to fight the oncoming invaders and throwing bombs. Schemes take up MP, which is limited by a typically blue meter alongside a standard green HP bar that represents the strength of your castle walls. You can also use copper and gold to “upgrade” or “train” your separate abilities after each battle, which allows you to increase your castle’s HP, boost your MP for schemes, strengthen your reinforcements, unlock new schemes, and other such things. These upgrades are essential to making progress through the game. Though all of the stages play out in almost the exact same way, the strength and number of your enemies will vary greatly, so constant upgrading is necessary. This makes a lot of sense, seeing as the title was original a mobile game where both copper and gold were available as in-app purchases (ranging from $0.99 for 50,000 copper coins or 50 gold coins to $5.99 for 350 gold coins to $14.99 for 999,999 copper coins). At this point, I’ve pretty much described the entire title. It’s an extremely short, very simple game that works much better as a free-to-play mobile game than as a Nintendo 3DS game that costs $3.99 to download. One of the main differences here is the lack of in-app purchases, which should translate to more copper and gold earned during gameplay. However, gold is still a bit scarce – and, without the option to purchase more, it’s hard to justify this shortage. The other difference is the presence of two screens, which works to the game’s advantage. On a mobile device with one touch screen, the process of tapping the screen to direct your attacks covers up the game’s art, which is pretty cute. Touching the bottom screen and watching the results on the top screen is much more visually satisfying. The 3DS version also gives players the option to control the entire game with the face buttons, which allows you to check out the top and bottom screens without anything being obscured by your stylus and/or hand. 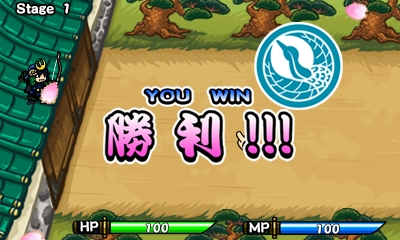 The art is cute, the gameplay is simple, and the upgrade system works to create a game that can get addicting. However, poor localization, a lack of care in porting the game from mobile to 3DS, and a overall sense of repetitiveness and unoriginality keep Samurai Defender from being a winner. In addition, the game doesn’t hold up to its $3.99 asking price, which makes it particularly hard to recommend. If nothing in this article has particularly grabbed your interest, you’re probably better off trying the game for free on your smartphone or just skipping it altogether. Either way, you’re not missing anything essential. However, if you’re looking for a Japanese-inspired defense game to satisfy your desire for short, quick sessions of play, this game will do the trick. There’s no doubt that a very specific group of players will thoroughly enjoy the time they spend with Samurai Defender, but it’s not a must-play addition to the 3DS eShop.

I'm Aria! When I'm not doing other things, I'm either playing video games or writing about them. If you like games, anime, and random stuff, you can follow me on Twitter @Sage0fForest
@@Sage0fForest
Previous Pokémon Super Mystery Dungeon Announced
Next Neverwinter: Strongholds Expansion Coming Soon