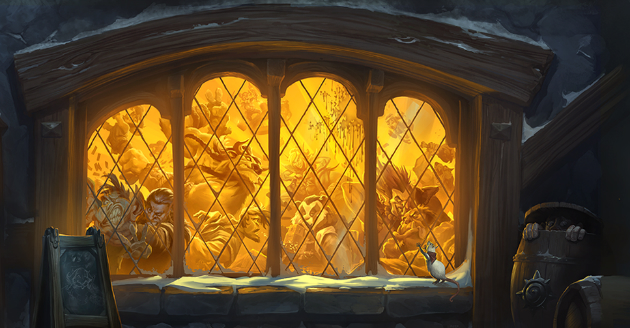 That newly added, empty Hearthstone button on the main menu will introduce a new game mode. Tavern Brawl is a new style of game-play in the deck building and dueling world of Blizzard. Announced early on Wednesday on the Hearthstone Blog, the new mode promises to change things up quite a bit with “exciting and unique rules.”

Also dubbed as a “new way to play,” Tavern Brawl will be week-long events in the game that could feature a number of different and forced approaches to a battle. FOr example: preset decks, following a particular guide of deck builds, and even adding buffs to certain minions and cards. Whatever it may be, the blog post states that it will change from week to week, keeping players on their toes.

There is some restrictions to entering a Brawl though, players must reach level 20 to duke it out. While the post also says the Innkeeper needs some time to organize things at the Inn, it does promise to be available in mid-June. Initially entry to the new mode will be free of gold or real-money charges, and after your first win you will be awarded a new pack.
The patch will also introduce the new hero skins that were previously announced this week. Magni Bronzebeard is the first character available, though two more are teased in the Hearthstone announcement, one of which looks like the silhouette of Sylvannas Windrunner (one of the newest editions to the Heroes of the Storm roster as well) for the Hunter class. In addition to that, some minor tweaks are underway such as your card backs being moved to the Collection Manager tab. You’ll also be able to select a favourite deck back, assign particular backs to custom decks, allowing you to further customize your approach to the Tavern.