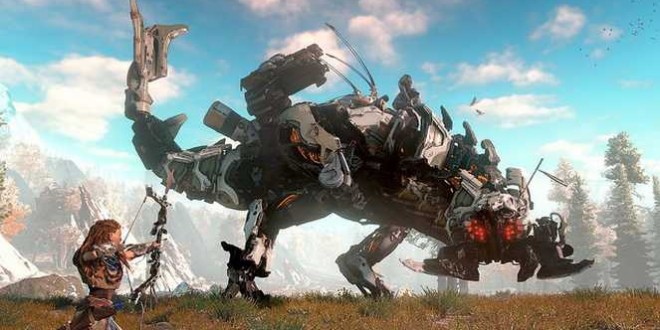 It began with a cinematic look through the past of an unknown future. From what began as a pre-historic milieu, turned into a post-apocalyptic future with where nature prevailed, and then, came dinosaurs. Not just any dinos though, this isn’t a glimpse into the Jurassic World sequel, they were robotic dinosaurs!

Guerrilla games is best known for its Sony first-person shooter series Killzone. Back in the day the Killzone series was a revelation and breath of fresh air in the FPS genre, it did lose a bit of its lustre as time went on and ideas were stretched a little thin (many may argue the genre as a whole suffered that as a whole). Horizon: Zero Dawn looks like a pretty big breathe of fresh air to the open-world genre, or at least the meshing of caveman and robotic future (or past?) look is different enough to stand out from the competition. “As Horizon Zero Dawn’s main protagonist Aloy, a skilled hunter, explore a vibrant and lush world inhabited by mysterious mechanized creatures.”

In the live Playstation 4 rendered demo, the female protagonist looks to be in need of some collecting from the robotic “wild life.” While sneaking through some lush environments, she inevitably stumbles upon a massive T-Rex-like dino. What transpires is an intense battle and eventual take-down with the massive robot. Using multiple weapons, including bows and arrows with static and electric charges, the demo gave you a brief look into some of the massive monsters you may encounter in your journey. The live demo did seem to play like a scripted encounter, so it’s possible it won’t be as open world as originally rumoured when Guerrilla teased the game last week.

As the demo says, there’s no stories about where the previous dwellers are or how they were wiped out, but I have a feeling that may be what’s on the other side of that Horizon you are to discover in Guerrilla’s new game.