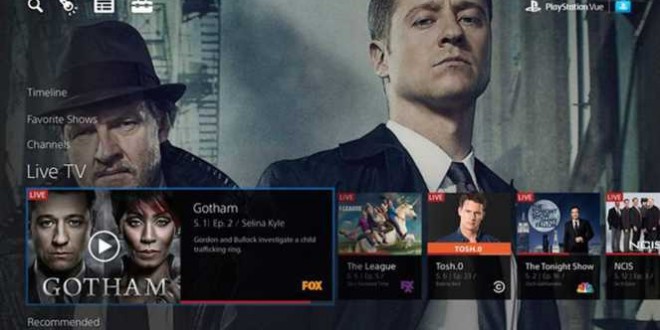 One of the non-gaming related news items at Sony’s E3 Press Conference on Day Zero, was television related. At last year’s E3 there were quite a few announcements about Microsoft and Sony both getting into the TV series realm, trying to grab a little of the House of Cards, Netflix, Hulu, and Amazon cake. That seems to have changed, with Microsoft closing its TV division months ago, and Sony quietly stepping back from their own approach to TV streaming.

It’s not fresh news that Sony is using Playstation Vue as their premiere place to watch television, it’s been available in select markets like New York since early 2015. Though, it is an impressive step forward in their formatting that raised a lot of eyebrows and had people “ooo-ing” and “awe-ing” on Monday night. Andrew House followed up some (surprisingly short) Morpheus news with the al-la-carte pricing model of Vue. On stage, Sony Computer Entertainment head Andrew House, explained that “it’s not just a streaming service, but a complete live TV service.”

With Vue, Playstation owners can select individual channels to purchase and sunscribe to. Sports fan? Sure, grab Fox Sports 1 or 2 or Fox Soccer Plus. There we a wide vareity of channels already signed on; from HGTV, to ShowTime, TBS, and MSNBC. Playstation Vue is one of the only services to offer such a model, no price confirmations across the board. As of Wednesday, the Los Angeles and San Francisco areas will now beable to use Vue and can see 85 channels per market. Each with 3 subscription packages that range from $49.99 to $69.99 USD/month. House also pointed out that Playstation Plus subscribers will also see discounts in their Vue prices.

Previous Range Rover prototype is drivable by smartphone
Next Does crowd-funding belong at E3?