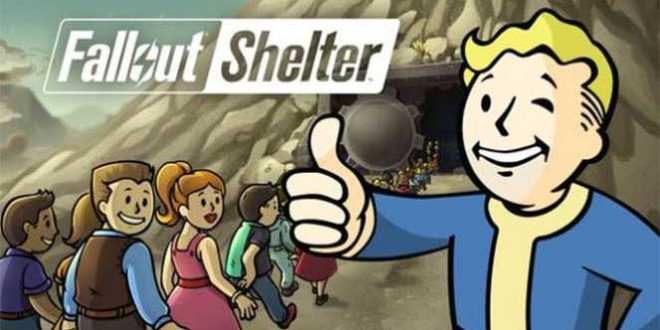 Just over a week ago, Fallout Shelter was sprung onto the world during Bethesda’s first E3 conference. Essentially a free to play management game with microtransactions where you are the Overseer of your own Vault and manage the every day life of the citizens in your Vault, Fallout Shelter proved to be very popular, especially with Fallout 4 coming out this holiday season. As of June 23rd, Fallout Shelter is ranked at number 10 on Apple’s most downloaded free games chart. For comparison, here are the apps that make up the top 10:

Interestingly enough, of the 10 most downloaded free apps, Fallout Shelter is the only game there, with the rest of the chart being mostly occupied by social media and entertainment apps. By comparison, the next closest game is Inside Out Thought by Disney, ranking in at number 20. Even more interesting may be the fact that the highest grossing apps chart is essentially a polar opposite of the most downloaded free apps chart, with free games taking up every ranking except 3 and 5 which are occupied by music apps while Fallout Shelter is ranked at number 8, just behind Candy Crush Soda Saga. Here are the top 10 highest grossing apps:

In just a week, Fallout Shelter proved to be very profitable for Bethesda indeed, especially considering that it is going up against well established games that are popular among the casual market. As expected, this is mostly thanks to the microtransactions in the game, offering up to 40 lunchboxes (which offer a random selection of 4 in game items) for $20. Even though it is completely optional to buy lunchboxes, and the lunchboxes are obtainable during normal gameplay (although the opportunity to do so is rather rare), enough are being sold to put Fallout Shelter in the same league as the infamous Candy Crush Saga. This not only proves that the Fallout franchise is wildly popular, but also that despite the many justified and well founded complaints that we may have about microtransactions, they are here to stay thanks to how profitable they are.