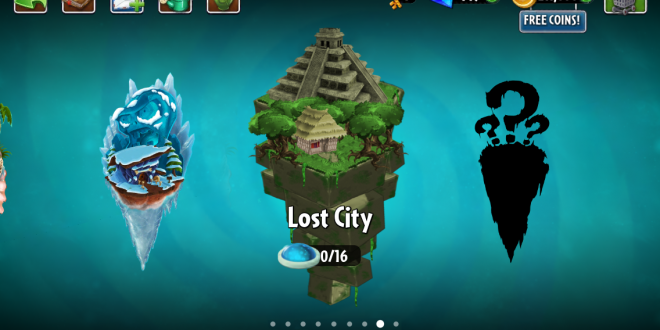 The next stage (or more accurately, the continuation of a stage) has just been released for Plants Vs. Zombies 2 and in it, the zombies are back on the march in the Lost City. With more than a dozen new levels, an endless wave mode for the stage, modified side quests that are repeatable, 3 new plants (one of which requires a payment to unlock for use in other areas), and quite a few new zombie types, the conclusion of the Lost City stage promises the return of the mechanics that you expect from the series along with a few new mechanics that you may find to be interesting.

Unlike the rest of the stage, and most of the other stages for that matter, this segment of the Lost City is noticeably more difficult. Rather than a gradual increase in difficulty, there is seemingly a spike in difficulty where there are more and higher quality zombies that spawn earlier, often before you can establish a good pool of resources. However, it is a manageable increase in difficulty that promotes the use of different and less expensive plants, especially the new ones that can slow down groups of zombies.

A new addition to the Lost City are traps, tiles that cause an effect to occur whether it be a wall of fire or a giant boulder to come rolling through the screen which can destroy both zombies and plants alike. Even though there are only a couple of levels that make use of these traps, they do present an interesting change in the normal gameplay strategy of simply filling every lane with plants.

Adding onto the quest log introduced in the previous updates, the Lost City provides repeatable quests that often encourage you to go back to other stages to hunt down a certain number of a specific zombie types. While it is a relatively small feature, it does increase the replay ability of the game as a whole.

As with every update, new zombies and plants are added. Unfortunately, the plants are rather dull this time around, featuring a single use plant that can slow groups of zombies, and a slowly recharging plant that can convert any tile into a resource producing tile. The Toadstool plant is also introduced, which can eat zombies from a fair distance away after which it will take a while to chew on the unfortunate zombie, but it can only be unlocked by buying it. Fortunately, it is added to your roster in a number of levels for you to try out, completely free of charge.

The new zombies (that aren’t re-skins of other zombie types) that are added are far more interesting, and much less annoying than the new zombies introduced in previous stages. One is the Imp Porter, who carries a tent on his back and upon reaching a sun tile will drop the tent to allow more zombies to spawn from the tent. The other is the Turquoise Skull Zombie, who can instantly burn your plants from afar and steal your resources, but they are relatively few and far in between. Neither of the new zombies are particularly common, but they are rather interesting to see on the field since the Imp Porter is less threatening than the enemies he can spawn and the Turquoise Skull Zombie acts as a sniper of sorts for the zombies.

Being a completely free game, it is absolutely worth the download for the Lost City stage. Simply completing the new levels can take a good hour or two, and the traps are a rather interesting gameplay addition, although like all traps, they do lose their luster a bit once you figure them out. If, theoretically, you wanted to purchase a World Key just to unlock the new stage though, you may want to look somewhere else, as World Keys are rather expensive for something that you can unlock through normal gameplay.