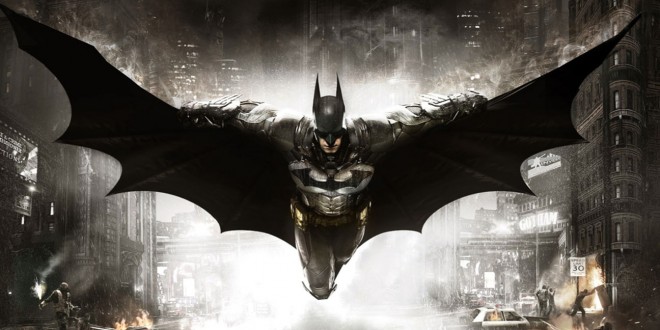 Batman: Arkham Knight is the third (and, reportedly, final) title in Rocksteady’s series of Batman games. In 2009, Batman: Arkham Asylum truly defined the superhero video game – though it had been attempted many times before. It was followed by Arkham City in 2011 and a prequel title, Arkham Origins, developed by Warner Bros. Games Montréal. All of the games (except, perhaps, Arkham Origins) were met with critical acclaim, and Rocksteady managed to prove that not only can a video game based on a comic book superhero work, but that game can actually be a fantastic experience. Now, Rocksteady is back with Arkham Knight, and it does not disappoint. With an absolutely gorgeous aesthetic, a huge open-world, and a good mix of new game elements and elements returning from previous entries, Arkham Knight is a worthy ending to a truly exceptional series. 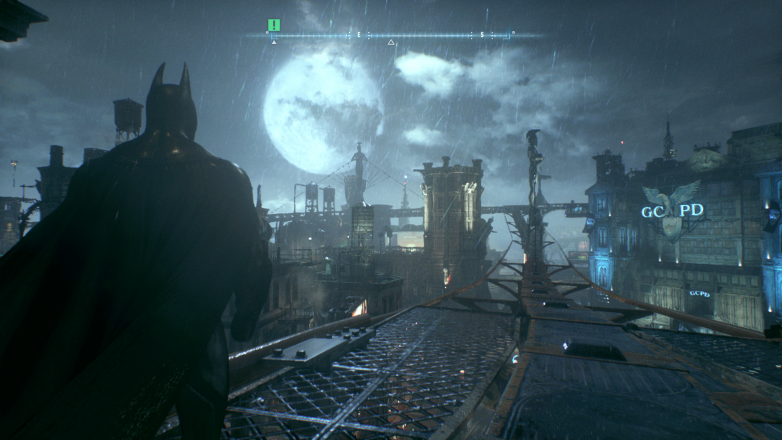 To start, let’s talk about the first thing you’ll notice when you start playing Arkham Knight – the game is beautiful. Your entire adventure takes place in a dark, rainy rendition of Gotham City. Shadows and highlights play together to create an environment that is noticeably complex in terms of visuals. The character models are all brilliantly designed (Poison Ivy, Scarecrow, the Joker, and James Gordon are particularly impressive), and Batman’s eyes and body language express emotion through the many plates of shining armor that come together to make up the new batsuit. In this reviewer’s opinion, Arkham Knight is tied with The Witcher 3 for the best looking game on Xbox One and PlayStation 4. No matter how many hours I sink into this game, I never stop being surprised and impressed by the visual quality of Arkham Knight. It also sounds great – Nick Arundel (the genius behind the sounds of Arkham Asylum and Arkham City) and David Buckley (a film composer who has worked on Metal Gear Solid 4 and The Town) have outdone themselves here – each track is carefully constructed to fit the mood and environment in which you hear it. You can check out a cool feature on the music of Arkham Knight here, and you’ll definitely be wanting to play this game with a good set of headphones on so you can fully enjoy the score. 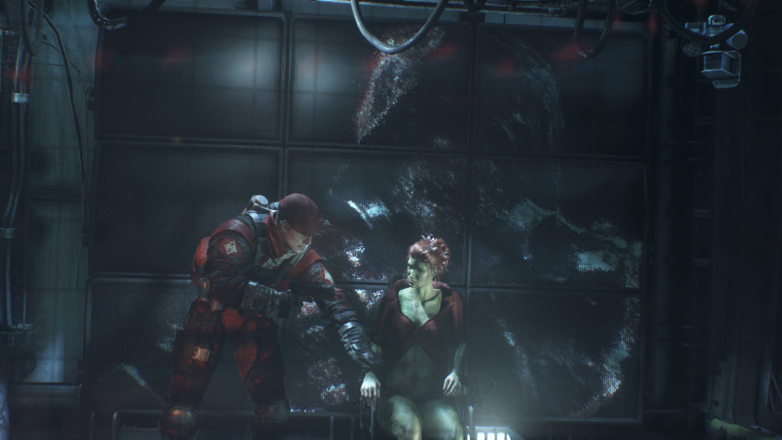 Now, let’s talk about the story – no spoilers, I promise. Set about a year after the events of Arkham City, Arkham Knight starts off with Scarecrow threatening to release a new strain of his fear toxin all across Gotham City. Frightened and shaken from experiencing such a threat after a small period of comfort after Joker’s death, the citizens of Gotham are evacuated – leaving Gotham City in the hands of criminals, the Gotham City Police Department, and, of course, Batman. It soon becomes clear, though, that Arkham Knight isn’t just about Scarecrow – tonight, the mysterious Arkham Knight is determined to make sure that Batman dies, and he’s willing to do just about anything to make that happen. 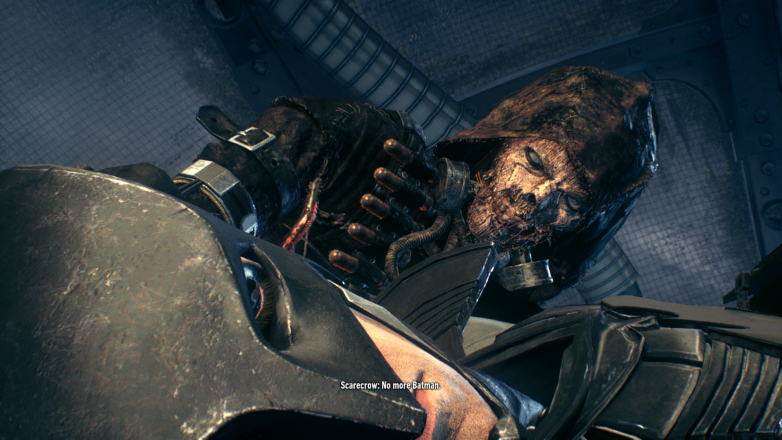 Throughout the night, you’ll encounter other famous Batman villains like Two-Face, Harley Quinn, Penguin, Deathstroke, and the Riddler. You’ll also team up with awesome characters like Catwoman, Nightwing, and Azrael – and, of course, you’ll have the aid of Oracle, Commissioner Gordon, and Lucius Fox. With a twisted, hallucinatory Joker by your side, you set out to save Gotham City and uncover the mysteries that it hides. That’s about as far as I can go without spoiling anything, but you can rest assured that Arkham Knight packs a deep, fascinating, and sometimes emotional story. The storylines are just enough to keep you focused on completing tasks, meeting new characters, and defeating enemies without disrupting your exploration of Gotham City, which is the biggest map in the series. When you complete the main quest line, you might not get all of the answers that you were hoping for – to see everything, you’re going to have to follow through with side quests and round up some collectibles. Though some people are frustrated by this, I like the way that it encourages players to dive into all that Arkham Knight has to offer. 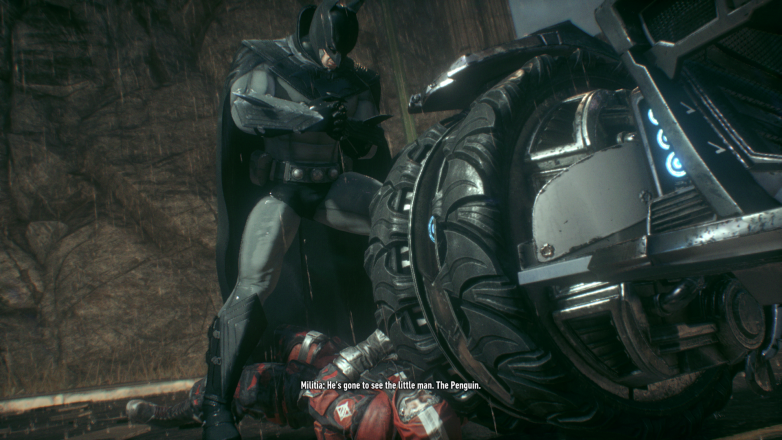 That brings us to the gameplay. The “Arkham” in Arkham Knight tells you much of what you need to know: the classic combat that Rocksteady made famous in Arkham Asylum and refined in Arkham City is made perfect in Arkham Knight. Pulling off combos, using gadgets, and stealthily taking down enemies has never felt better. Gliding is better here than it was in any of the other Arkham games, and I was happy to spend long periods of time grappling and gliding through Gotham with no particular destination. Detective Mode is back, and it works pretty much the same way as it did in the other games. While Batman is armed with the usual array of awesome gadgets, the newest and most controversial addition to the Arkham formula is the Batmobile. 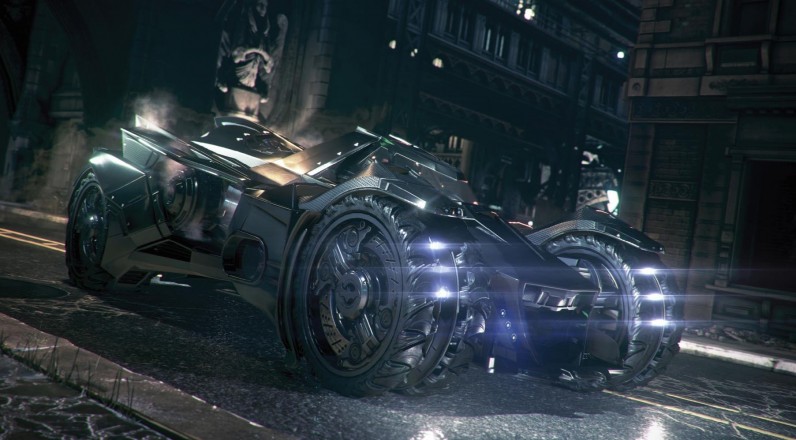 Let’s set one thing straight: the Batmobile is awesome. It’s fast, it’s strong, and jumping off of a building, calling the Batmobile on your way down, and landing smoothly in the driver’s seat is seriously too incredible for words. At first, the Batmobile is hard to control, but a quick trip to the settings menu (set battle mode to toggle) makes things much easier. After you spend some time with it, driving the Batmobile feels natural and smooth. In its battle mode, the Batmobile turns into an insanely tough military vehicle – it’s basically a tank, and characters often refer to it as such. Taking down enemies and smashing through the many destructible features of Gotham City is really cool in both of the Batmobile’s modes. The issue is how often the game forces you to use the Batmobile – Arkham Knight‘s gameplay is almost perfect, but its greatest flaw is the lack of balance shown in the use of Batman’s shiniest toy. You’ll have to use the Batmobile to solve puzzles and complete missions that really shouldn’t require the use of a vehicle. This is particularly weird in the Riddler missions that focus on the Batmobile – while the race track missions are a lot of fun, they don’t feel as clever as some of the Riddler missions in the older games, and I’m not sure why the Riddler would want to see Batman race around an underground track three times. There are even puzzle-based missions that require you to use to Batmobile, and the car feels awkward far more often than it feels right in these puzzle settings, especially indoors. However, there are levels where the Batmobile really works well, like a mission relatively early on in the game that’ll have you controlling the Batmobile remotely to get you out of a particularly sticky situation with the Arkham Knight. The Batmobile works more often than it doesn’t, and it’s a really awesome addition to the series, but there are times when it does feel like the game is pushing it a bit too much – the Batmobile is so cool that I really didn’t feel the need for the game to remind me to use it so frequently. 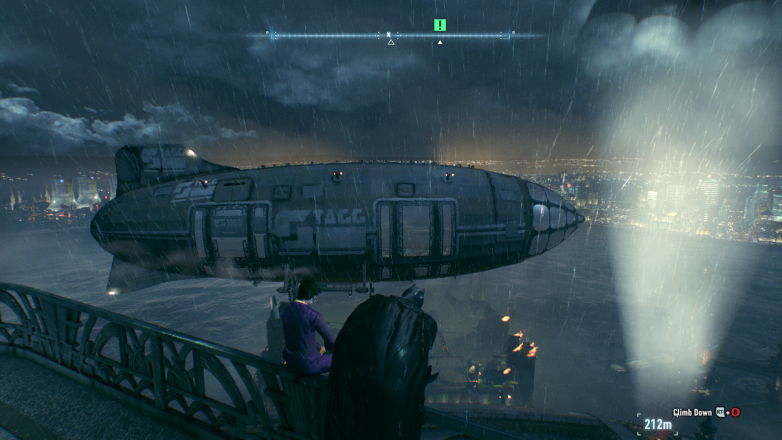 There’s a lot going on in Arkham Knight, and almost all of it works on a level of mastery that shows just how skilled the developers at Rocksteady are. Throughout the Arkham series, the core gameplay formula has been consistently improved and it finally attains near perfection in Arkham Knight. Though it has its flaws, Arkham Knight brings Rocksteady’s epic Batman saga to a close with a gorgeous, engrossing, and undeniably fun experience.

Though it has its flaws, Arkham Knight brings Rocksteady's epic Batman saga to a close with a gorgeous, engrossing, and undeniably fun experience.

I'm Aria! When I'm not doing other things, I'm either playing video games or writing about them. If you like games, anime, and random stuff, you can follow me on Twitter @Sage0fForest
@@Sage0fForest
Previous Is Bungie’s Destiny falling apart?
Next Plants Vs. Zombies 2: Lost City Part 2 review