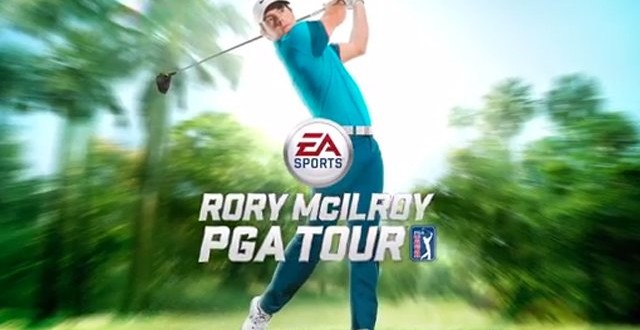 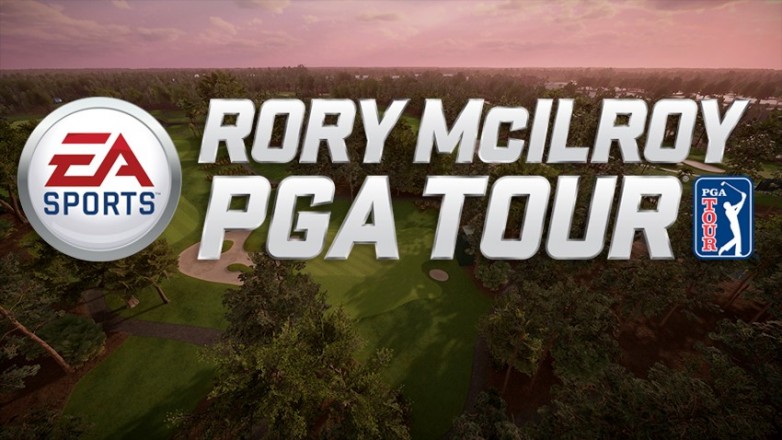 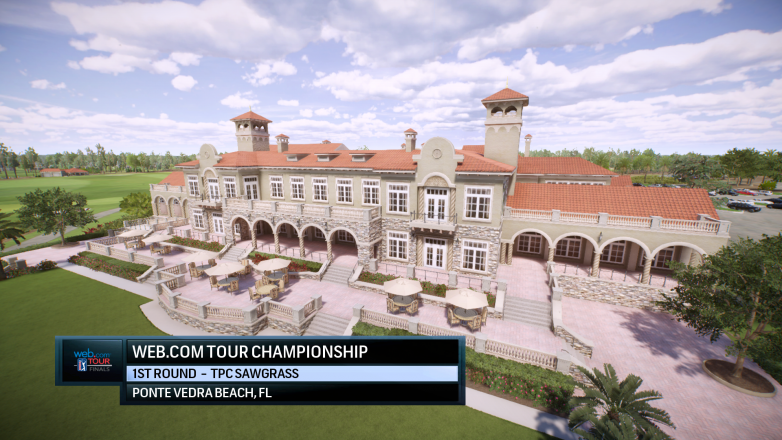 The environments in the game look fantastic, and the visuals are one of the best parts of Rory McIlroy PGA Tour. EA used the Frostbite 3 engine to make the game, and that additional effort definitely shows. From time to time, the faces of the characters will look a bit off. It’s also not uncommon to see some frame rate issues when in more complex environments (like the course based on Battlefield). It’s also common to see environmental features like trees and bushes seem to get buggy when a golf ball gets close to them. Overall, though, the game looks great. When everything is working as it should, the courses look extremely realistic, and the courses based on actual locations are wonderfully realized. The sound, on the other hand, is somewhat disappointing. The commentary (provided by Frank Nobilo and Rich Lerner of Golf Channel) really makes you feel like you’re playing a real golf tournament, but it often makes annoying mistakes. For example, you might hit a great chip shot onto the green, but the commentators might still be talking about your initial drive. The commentators also have a habit of switching gender pronouns during conversation. Your character will be called “he” and “she” several times throughout a course. These are petty concerns, I know, but Rory McIlroy PGA Tour often brings the feeling of real golf to the player, and these inconsistencies break that spell. The music, crowd noises, and the sound of a club hitting the golf ball are all decent, though – these sounds do their job, but not much else. The sound isn’t outstanding, but it also isn’t a fatal flaw. 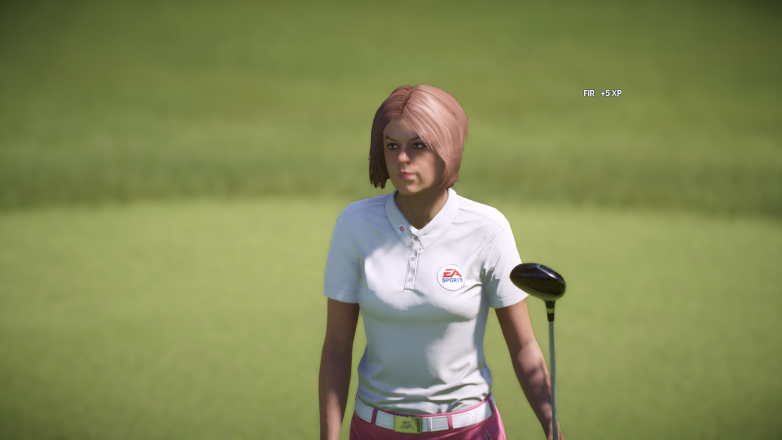 Character customization in Rory McIlroy PGA Tour is a lot of fun (you can see my character above), but there aren’t very many options. Previous PGA Tour games had a more complex character customization options, but Rory McIlroy PGA Tour cuts a lot of these in favor of a more shallow character creation process. As others have already pointed out, it would be a miracle if you managed to get your character to look anything at all like you. You’re able to set up four different outfits for your golfer, and the one that your character wears is dependent on what day of the week it is (in game). As you progress through the game, you’ll unlock new clubs, clothes, and golf balls. This adds a reason to keep replaying courses that you’ve already played through, even though the selection remains quite limited. If you decide to play as one of the famous golfers that are playable in the game, you’ll be able to choose between twelve male golfers. The Legends featured in Tiger Woods PGA Tour 14 are gone along with the players from the Ladies Professional Golf Association. Since there aren’t many golfers to choose from, you’re better off making your own character – unless one of your favorite players is in the game. 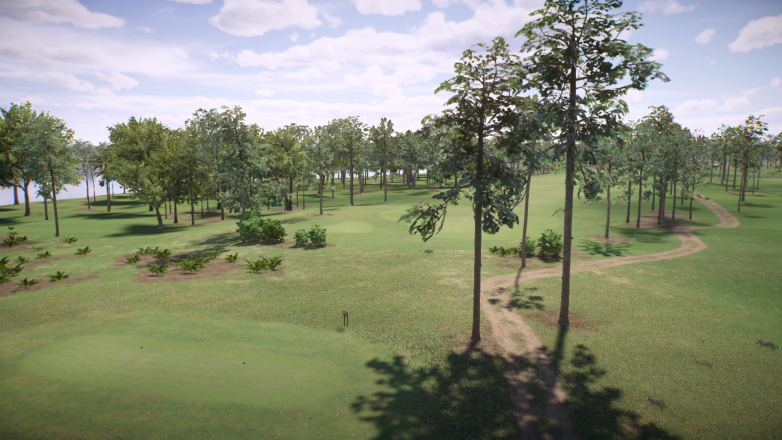 Just as there are limited options while customizing your character, there are very limited options when choosing a golf course. The game features eight courses, plus another that was a pre-order exclusive. EA has said that additional courses may be added in the future as DLC, but the game is very light on content as it is right now. The fantasy courses are easily the most entertaining of all the courses that Rory McIlroy PGA Tour offers. Playing through a course based on the Grand Canyon is a dream, and the Battlefield themed island course is also really impressive. Even though the courses that are included are often breathtaking and beautiful, the fact that there are only a handful of courses to play through cannot be ignored – it becomes one of the game’s worst flaws. 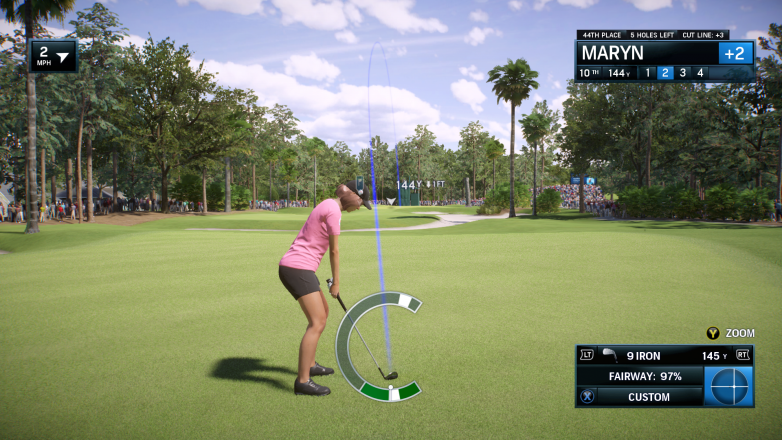 The core gameplay of Rory McIlroy PGA Tour will be familiar to anyone who has ever played a golf game before. Whether you’re a Mario Golf veteran or a PGA Tour fanatic, you’ll find a control scheme that works for you. I found that the classic three-click control scheme was the best way to play, but there are two other control schemes that focus on using the control stick to execute a swing. You can either choose an arcade style that uses power boosting and an easy way to put spin and power boosts on the golf ball (this style is more consistent with previous PGA Tour games), or you can use a more hardcore style that removes all assistance and uses the way you move the control stick to determine power – spin, zoom, and the assisted aiming arc are all gone. This is easily the most difficult mode in the game. The controls haven’t changed very much, but a few other things have. 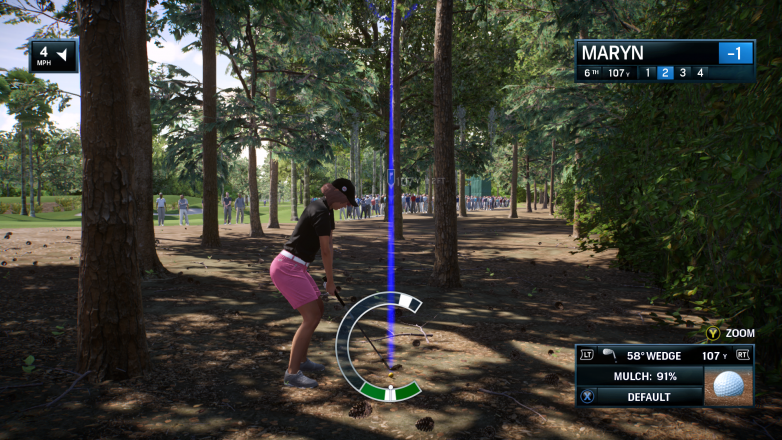 One of the biggest and best changes that Rory McIlroy PGA Tour brings to the series is the lack of loading times when playing through a course. Once you choose a course, the game renders the entire course (9 or 18 holes). This way, there are no long pauses between holes. This really helps keep the game going at a nice momentum, and it also works with the commentary, scoreboard, and real golf courses to create an immersive golfing experience. In a lot of golfing games, when you hit your ball into an area that would usually been seen as unplayable (like the picture shown above), the ball is automatically moved to a different location. In Rory McIlroy PGA Tour, you’ll have to take your next shot from wherever your ball landed – even if its in an inconvenient spot or on the fairway of another hole. This element can make things more difficult, and it can get annoying from time to time. But, like many of the features in the game, it contributes to the authentic golf feeling that you get while playing the game. The single player career mode, though, interrupts this illusion. In past games, you experienced a slow and steady rise to stardom. In Rory McIlroy PGA Tour, you career consists of jumping between courses, playing matches, and then repeating the process. There could have been a lot of depth to the career mode, and we’ve seen it done in other golf games. In this title, the career mode is about as shallow as it gets. 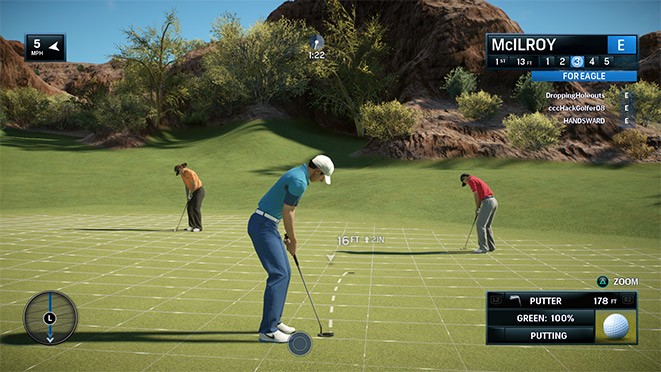 Most players will probably stick to the single player modes in Rory McIlroy PGA Tour, but the multiplayer is definitely worth trying at least once. I found that, during my time with the game, playing local multiplayer is much more fun than playing online – specifically the Stroke Play mode. Competing with your friends to see who can get the best score on each hole is a lot of fun, and Rory McIlroy PGA Tour becomes a good choice for playing with the other people on your couch – even though golf games usually aren’t known for their multiplayer. Even though local multiplayer is fun, the same flaws of the single player mode are here. The course selection is small, and what’s worse is that there are only two local multiplayer modes to play, and the online Head-to-Head mode can be hard to use. The concept itself is simple, but connecting to other players and finishing matches without connectivity issues can be challenging. When Head-to-Head works, though, it’s a lot of fun. The online tournaments have a lot of potential as well. 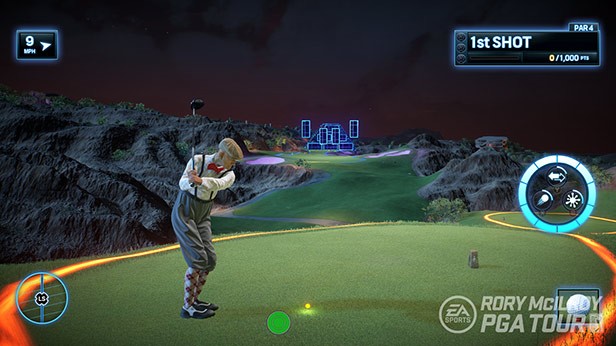 My personal favorite part of the game is the Night Club challenges. The Night Club offers over 170 challenges (according to EA), and they get harder as you progress. The courses look awesome at night, and the diversity of objectives is refreshing after the frustratingly consistent nature of the career mode. 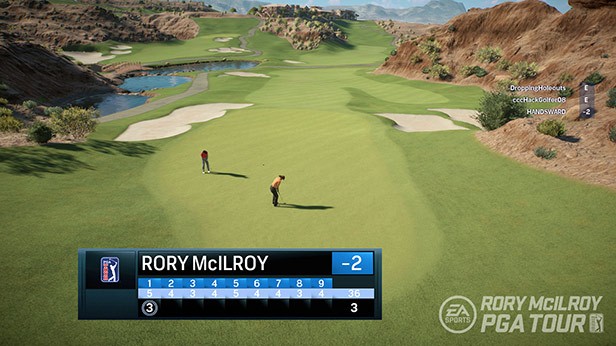 If you’re a fan of the PGA Tour series, I’d suggest that you pick up Rory McIlroy PGA Tour. It might not be the PGA Tour you remember, but it’s still a fun game that you’ll find yourself playing for hours. However, if you’re not a fan of golf or golf games, Rory McIlroy PGA Tour isn’t going to change your mind. The Night Club challenges, the use of the Frostbite 3 engine, and the infrequent load times are all great, but these features will please PGA Tour veterans more than they will attract new players. Even though Rory McIlroy PGA Tour is a fun title that brings a few impressive changes to the series, it never manages to be anything more than an average golf game.

Even though Rory McIlroy PGA Tour is a fun title that brings a few impressive changes to the series, it never manages to be anything more than an average golf game.

I'm Aria! When I'm not doing other things, I'm either playing video games or writing about them. If you like games, anime, and random stuff, you can follow me on Twitter @Sage0fForest
@@Sage0fForest
Previous Legacy of the Void Pre-Purchase Available Now
Next Destiny weapon changes inbound-Part 1: Normal weapons