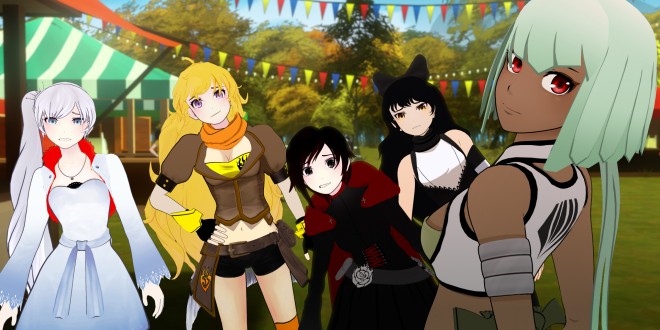 At the end of the second volume of RWBY, everything seemed to be going so well for all the Huntsmen and Huntresses: Roman Torchwick is locked up in an airship, a Grimm invasion is repelled, and while the rest of the villains aren’t quite accounted for, they at least went back into hiding. True, some people got yelled at for letting the invasion happen in the first place, and the White Fang is still a threat, but with how quickly Atlas turned the tide during the invasion, it can be safe to assume that everyone thought that life would return to a semblance to normalcy.

In fact, this volume of RWBY starts off with a giant festival and tournament that attracts the attention of the entire kingdom; hardly the kind of thing that you want to do if there was an imminent threat.

(Potential spoilers begin here, skip to the end for a spoiler-free version)

How could a cage match with children possibly go wrong?

The third volume starts off innocently enough, with all the protagonists enjoying their lives as Huntsmen and Huntresses. To no one’s surprise, Cinder and the rest of her allies are back to their scheming ways, but she’s hardly the kind of person who would send an explosive-laden train into a floating stadium. Instead, her more calculating and subtle nature leads to one of the most fascinating long term plays that one can expect from a villain.

In fact, it can be safe to say this is the volume that Cinder takes the spotlight, not only from her fellow villains, but from the rest of the characters as well. As volume three goes on, you can’t help but forget about the actual Vytal tournament and what team RWBY are up to, seeing as how the tournament fights themselves are rather mundane. After all, the main characters have some semblance of plot armor, and there’s only so many ways that you can present what is essentially a giant cage match.

Naturally, this also means that some of the new characters that are introduced in this volume seemingly only exist for the sole purpose of being beaten by the main characters; an unfortunate necessity in this scenario, but a slightly disappointing one nonetheless.

School’s over, time to get serious

From a narrative standpoint, this leads to the best and most engaging volume of RWBY thus far, as it focuses less on absurd fight scenes and feel-good moments and more on creating tension and meaningful character development. If anything, this is the volume that one should start watching RWBY from if they haven’t seen it before, as it reveals more about some of the main characters than the other two volumes combined by doing one simple thing: showing them at their moments of helplessness.

If you have avoided RWBY simply because you don’t like some of the cliches that one can expect from anime, this third volume of RWBY might be the best way to get into the show simply because of how it is written. Yes, it is a bit slow at the beginning, but ultimately it focuses less on world-building and more on character development. Plus it focuses on the best kind of villain: the cold, calculating, and ruthless kind that doesn’t simply break the protagonists bodies, but their spirits as well.

@https://twitter.com/thefallenlords
Previous Homefront: The Revolution beta impressions: these are the times that try men’s souls
Next Grifball and more coming to Halo 5 in Hammer Storm update