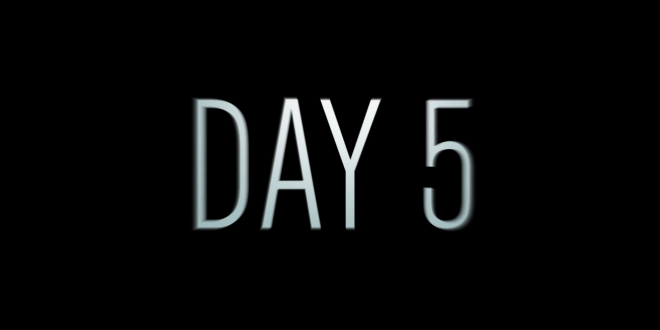 At long last, after six episodes and almost five hours of contemplating to what lengths would people go to fight the apocalypse, Rooster Teeth’s Day 5 series comes to an end. The culmination of Ellis, Sam, Jake, and Ally’s journey to try and find out why people are dying in their sleep ends not with a whimper, but with a bang, as they finally realize that the cost of salvation may be their humanity.

As the last episode, episode six of Day 5 features some of the best acting in the series as all the characters are pushed to their physical, mental, and ethical limits, not to mention the fact that they are all still just one horrible mistake away from drifting off into the nether. Needless to say, Day 5’s finale is also well written, with no shortage of moments that make you question if the good guys (or more accurately, the people that the protagonists have allied themselves with) are really the good guys.

Speaking of questionable characters, Dr. Abrams is involved in what may very well be one of the best scenes of Day 5. Played by Shannon McCormick, who you might know as Agent Washington from Rooster Teeth’s Red Vs. Blue series, Dr. Abrams is the human personification of making the ends justify the means. As such, he believes that no matter what he is doing, as long as it is in the name of preserving the human race, he is morally justified because he acts in the name of the greater good. Naturally, this clashes with those who have had to make the ultimate sacrifice for his science, and this clash comes to an end with one of the best confrontation scenes of Day 5.

Similarly, Ellis’s character arc comes to a rather interesting conclusion in Day 5’s finale as his mind starts to break down. Almost consumed by his desire to find, and maybe even end, the cause of Day 5’s extinction level event, Ellis has stolen the spotlight from the other protagonists with the fact that he had been the most active in their efforts to find what is essentially a cure for death. At the end however, even Ellis comes to a realization that maybe, just maybe, sacrificing something in the pursuit of the truth may just be worth it. He may be on the opposite side of the coin from Dr. Abrams, but at the end of the day, they are still on the same coin, trying to save humanity at any cost (though they may not want to admit it).

Unfortunately, despite such wonderful acting and intriguing story arcs, Day 5’s finale may leave you somewhat unsatisfied. While most of the interpersonal conflicts of Day 5 are more or less resolved, it appears as though Rooster Teeth may have expanded the scope of Day 5 to accommodate any future projects they may have with the story. While this may be beneficial in the long run (if you are interested in Day 5’s universe at least), it does result in a lack of closure for Day 5 as of now.

Needless to say, you may want to make sure that you’ve watched the rest of Day 5 before you attempt to tackle the finale. Sure, the finale is fairly self contained, meaning that if you really wanted to you can just watch Day 5’s finale by itself and not miss too much, but like Rooster Teeth’s Red Vs. Blue series, the most interesting part of Day 5 isn’t necessarily the overarching theme, but rather the characters that inhabit the universe.

@https://twitter.com/thefallenlords
Previous What’s in Fallout 4’s Vault-Tec Workshop DLC and is it worth it?
Next Making Halo’s Spartans fight in ScrewAttack’s Death Battle: An interview with Chad and Torrian

Rooster Teeth’s Day 5 episode 5 review: The end is nigh, and full of terrors

With just a couple of episodes left, you can’t help but think about how Rooster Teeth’s Day ...