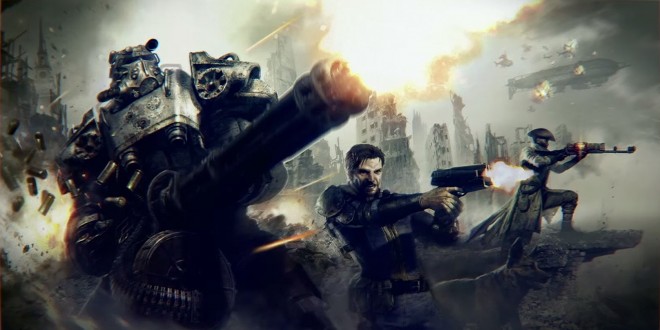 How Fallout 4’s greatest companion ever, Preston Garvey, will have a central role in upcoming DLCs

If you’ve played Fallout 4, then you probably already know of the greatest companion ever, Preston Garvey. To the enemies that you meet in the main game, he goes by many names: the Settlement Sergeant, the Colonial Crusader, the Boston Boy Scout, and on the list goes.

That may be all fine and dandy for the existing enemies of the Commonwealth, but did you know that Fallout 4’s upcoming DLC was made specifically with Preston in mind? That’s right, with each DLC, Preston’s legend grows until every raider in every corner of post-apocalyptic America suffers from a sudden (and explosive) loosening of the bowels once they hear the phrase “something different for you.”

“But that’s preposterous,” you say. “How could the true General of the Minutemen possibly achieve such greatness?” Well, dear friend, one only has to look at the description of the DLCs to realize that they are merely prophecies of Preston’s rise to power.

Search your feelings, you know it to be true
Just take a look at the Automaton DLC’s description: “the mysterious Mechanist has unleashed a horde of evil robots into the Commonwealth.” And who would be the first victims of his evil onslaught? It can’t be the Brotherhood of Steel, or the Institute, or even the Railroad. After all, they can defend themselves, or hide in a worst case scenario.

So who’s left? The defenseless, those who can’t run because they have nowhere to run to, and those who can’t afford to run; in other words, the everyday settlers of the Commonwealth. And who will they turn to because the Sole Survivor is too busy looking for aluminum? That’s right, with a righteous shout of his battle cry, “Another settlement needs our help!”, Preston Garvey will be the one who jumps to the rescue.

And once the Mechanist is defeated, what then? Well, the Champion of the Commonwealth has to do something in his spare time to keep his settlement saving skills sharp, so that’s where the Wasteland Workshop DLC will come into play. After all, who can possibly capture Deathclaws and imprison them in settlements for his own amusement? The fearless Preston Garvey, who toyed with a Deathclaw while the Sole Survivor was a measly low level character cowering in Power Armor, that’s who.

Until the very stars are ours

“But wait,” you say. “What of Far Harbor? It says that the Valentine Detective Agency sends you to Maine, how does that have anything to do with Preston?” While that may be true, at least initially, all you have to do is read the DLC description just a little bit more to see how Preston will spread his justice all over the continental United States.

See it yet? The part that says that the DLC will be “filled with new faction quests, settlements, lethal creatures and dungeons”? No, your eyes do not deceive you: there are going to be settlements in Far Harbor. And where there’s settlements, Preston Garvey will be there, until the very stars themselves know of the motto “I’ve gotten word about a settlement.”