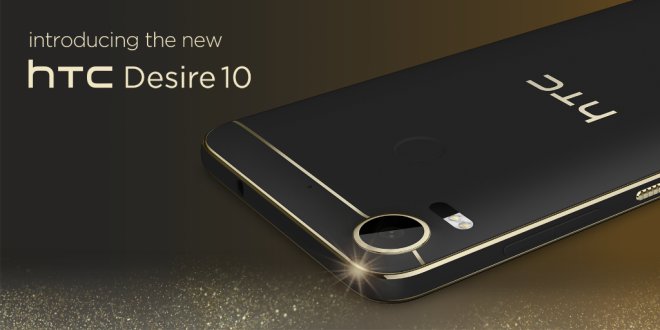 Even though HTC is constantly struggling to get in the race with Samsung and Apple, it might not be the best moment of the company to take on the battle of the giants in the high-end market. However, when it comes to mid-rangers, the Taiwanese company is definitely one of the best. The latest addition to the Desire line, the HTC Desire 10 is definitely one of the best-looking smartphones on the market, if not the sexiest. HTC smartphones usually look great, but the Desire 10 is in arguably the sharpest looking one yet.

The HTC Desire 10 may be made of plastic, but it sure looks premium, thanks to the metallic details. The handset is available in black, navy, white, and pale blue, and they all look great. There are two versions of the smartphone, the less powerful “lifestyle” version, and the more appealing- and expensive- “pro” variant. Both have the same size and beautiful design, but under the hood, they are quite different, according to TGC. The differences will be reflected in the pricing of the handsets, but the truth is that even the less impressive version will still be just perfect for an average user.

The 5.5-inch HTC Desire 10 “lifestyle” has a 720p display, is powered by a Qualcomm Snapdragon 400 processor and includes 2 or 3 GB of RAM. The internal storage is not bad at all, this version is available with 16GB or 32 GB of storage that unfortunately, can’t be expanded given the fact that the device lacks a microSD card slot. The handset is equipped with a 13MP primary camera and a 5MP front-facing one, so users will be able to capture some good quality images.

The more powerful version of the HTC Desire 10 has a MediaTek Helio P10 processor under the hood, and it also got a boost when it comes to storage and RAM memory. The pro version of the device includes 3 or 4 GB of RAM and it includes up to 64GB of internal storage. The 100p display and the cameras of this version are also more impressive than the ones found in the “lifestyle” variant, the selfie camera is a 13MP one, while the back camera has a 20MP lens. The device also offers 150° panorama mode, so users will be able to capture some really cool pics and videos.

The “lifestyle” version of the smartphone will become available starting Tuesday in the UK and in several other countries, for £249. The “pro” version will only be released later, and there is no information regarding the price tag of this version, but considering the fact that it is a mid-ranger after all, we shouldn’t expect a jaw-dropping price tag. Which version would you like to own?

I’m Load The Game’s co-founder and community manager, and whenever I’m not answering questions on social media platforms, I spend my time digging up the latest news and rumors and writing them up. That’s not to say I’m all work and no fun, not at all. If my spare time allows it, I like to engage in some good old fashioned online carnage. If it’s an MMO with swords and lots of PvP, I’m most likely in it. Oh, and if you’re looking to pick a fight in Tekken or Mortal Kombat, I’ll be more than happy to assist! Connect with me by email markjudge (@) loadthegame.com only
@@MarkJudgeLTG
Previous Danes make a projectile bee simulator
Next The Pixel and Pixel XL Could Come Without An Audio Jack