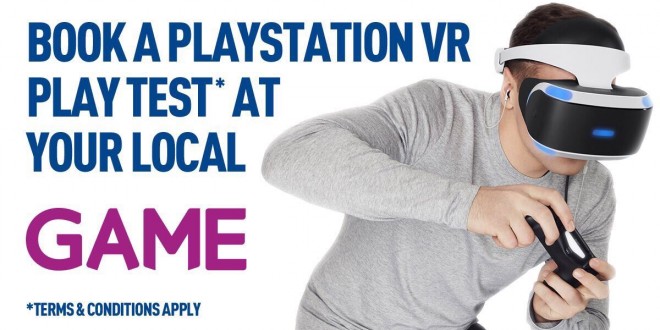 Here in the UK the popular video game retailer GAME has taken to charging people to try out the Playstation VR. Only certain stores around the UK are part of this utterly ludicrous promotion but the leader of this band of rebels is GAME Bromley, the deal is you give them £5, (or just over $6), and they will let you try out the Playstation VR…for 10 minutes! that’s it only 10 minutes for your hard earned cash, of course you could choose to step it up and go for the secondary offer of £15 , (or just over $18) for a whole 30 minutes…seriously?

GAME took to Twitter to make their announcement and they were met with anything but good responses, just a lot of tweets from people, some trying to understand what they had just read and other expressing their disgust at the idea, claiming that it is just another money grab, which I can see it being. GAME Bromley is claiming to actually have permission from Sony but this is doubtful as the developers that are behind the games the are being demoed are at a loss and it is unlikely that GAME, Sony and the individual developers have come to some sort of agreement where everyone is compensated, it is easier to imagine someone had an epiphany at GAME and was trying to impress his manager and get a promotion because this is just complete madness.

I whole-heartedly believe that this is a half-hearted attempt by some staff at making a little extra money on the side but news flash, we are not as stupid as you think we are, better luck  next time.

I am a gamer, I am also a writer and by now you can probably tell where I am going with this, that's right you guessed it, my favourite thing is eating.
@https://twitter.com/CharlesJRafter
Previous Rockstar : The Legacy
Next Reus Review: A Wealth of Fun