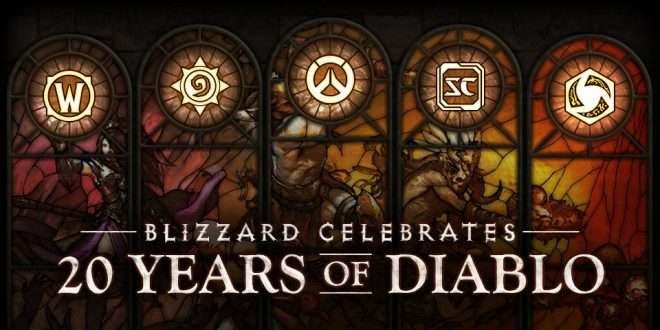 It’s hard to believe that it’s been 20 years since the action RPG Diablo first released. The satisfying combat and the neverending quest to advance your character was furthered by two sequels, Diablo II in 2000 and Diablo III in 2012. Diablo was a pioneer in the genre, striking a chord with an extremely loyal fanbase that to this day can’t get enough of the loot-centric grinding and constant min/maxing the mechanics provide. As one of the longest lasting franchises in Blizzard Entertainment’s collection, it’s only fitting that the developer celebrates such a milestone with an exciting anniversary event.

In addition to an event inside Diablo III (which was to be expected) Blizzard has launched limited time rewards in its other IPs that promote and celebrate the beloved ARPG. This isn’t the first time there has been cross-promotion involved in Blizzard’s strategy, with Heroes of the Storm’s roster being made up pretty much exclusively of significant characters from other games. There was also the promotion earlier this year that rewarded an exclusive Overwatch skin for Genji if players spent some time in Heroes of the Storm. In a battle.net blog post, Blizzard outlined the rewards and events coming to its games for the Diablo anniversary:

Recapture the feeling of your first play through of the original Diablo with The Darkening of Tristram tribute event. Venture through a reimagined version of the original cathedral in Diablo III and keep an eye out for some familiar items.

Heroes of the Storm:

The battle for the High Heavens continues, and a new Diablo-themed portrait is up for grabs! Can you emerge victorious on this hectic new brawl map?

In this Tavern Brawl, a hooded stranger awaits, holding a grim deck in his hands. Will you unravel the secrets surrounding this dark wanderer?

Bring the battle for Sanctuary into the fight for the future with in-game sprays representing your favorite Diablo III classes—along with a new player icon modeled after the Lord of Terror!

Put the Lord of Terror to work for you with a Diablo-themed worker portrait.

Strange things are afoot in the world of Azeroth as denizens of Sanctuary cross over into an unfamiliar world.

While many of these descriptions are vague, it’s definitely enough of a teaser to get fans of Blizzard games excited for the Diablo Anniversary event. More information will be released in the coming days as we get closer to the 31st.

My name's Zach and I'm a college student supporting myself with freelance writing as I finish my degree. I largely focus on technology news and reviews for LoadTheGame, though I do report on games from time to time.
@zr566762
Previous Playstation Plus Games for January
Next Postal Source Code Released To Public