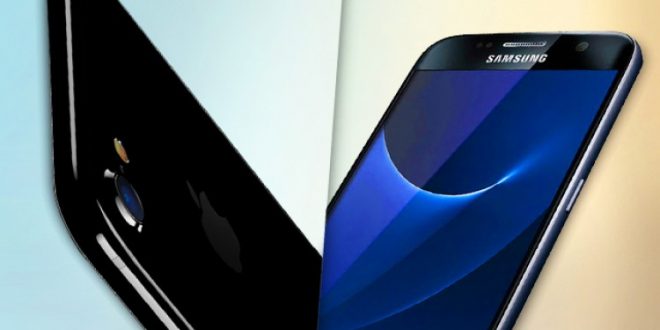 Samsung Galaxy S7 Vs Apple iPhone 7 – Which Smartphone Comes Out On Top?

The Samsung Galaxy S7 and Apple iPhone 7 are two of the top phones on the market. Both provide some of the best experiences available on mobile today, but how does one choose between two great phones? Below we go over some of the pros and cons of each device and make our recommendation based on phone specifications and the type of user each mobile device is suited for.

This section will focus mainly on the physical construction of the phone.

With these recent releases, Samsung and Apple have listened to users who desire both a practical and durable phone in addition to great style. Both the Galaxy S7 and the iPhone 7 are built to take a beating, with a Series 7000 aluminum chassis in addition to water and dust resistance. Samsung left out the water and dust resistance in the Galaxy S6 for some odd reason, but it’s back in the S7, and this is the first phone from Apple that won’t give you serious issues if you get it wet. Apple also had to remove a headphone jack to achieve this resistance, something they’re touting as a feature but feels an awful lot like an annoying omission.

The “home button” on the Apple iPhone 7 feels higher quality and features vibration feedback that the Galaxy S7 is lacking. Apple also wins in the phone speaker department, with better audio quality for media played through the iPhone 7.

The lightning port on the iPhone is proprietary and doesn’t play well with the more universal micro usb devices. This may add unnecessary costs for those making the switch from Android to Apple, as they’ll have to replace all of their chargers with new Apple devices. The lightning port also requires a Digital to Analog converter in any headphones plugged in, which adds yet another cost to the switch.

Our verdict on physical design:

Samsung’s Galaxy S7 is rated for up to 30 minutes at 1.5 meters vs Apple’s iPhone 7 at 1 meter. In practical applications, this often won’t make a difference, but the Galaxy S7 has a higher chance of emerging unscathed if tossed into deeper water. Apple’s removal of the headphone jack and their proprietary charging device is annoying enough that it doesn’t make up for better quality speakers and high-tech home button.

This section will be short and sweet.

Our verdict on display:

Apple has stated that the demand is too high for their phones to keep up with production on OLED screens, and while that might be a nice problem to have, when it comes down to it Samsung’s Galaxy S7 has a better display. Apple’s LCD is no match for the Super AMOLED screen on Samsung’s phone.

While Samsung’s specs look better on paper, in practical applications Apple comes out ahead. Samsung is notorious for clogging up their phones with unneeded apps, and while the phone is super fast out of the box, it starts to slow down a bit with regular use. There are issues such as stuttering when loading web pages that Apple does not struggle with. One might argue that it’s an issue with the Android operating system in general, but Google with their Pixel phones have proven that the system itself is fine. Something Samsung is doing with their phones causes the Galaxy S7 to run slightly slower than the iPhone 7.

One thing worth mentioning is the fact that Android in general has more options for customization. For those that are tech-savvy, rooting the Galaxy S7 and removing bloatware that way may solve the issue, but for the average user it makes a lot more sense to go with the faster option that requires no additional tweaking.

Our verdict on performance:

Both phones are extremely fast, but Apple pushes ahead with a well-optimized system that outperforms the Galaxy S7 over time.

The battle is super close with these two phones when it comes to camera quality. In past devices, Samsung blew Apple out of the water, but Apple actually has a better quality front camera than Samsung this time around. Apple finally added optical image stabilization to their devices as well as a faster aperture, but Samsung still edges ahead with a f/1.7 camera vs a f/1.8 camera on the iPhone.

Our verdict on camera:

Samsung edges out Apple on camera quality just barely, but both phones actually fall behind the top dog on the market: The Google Pixel. Take a look at this image from Forbes giving a side by side quality comparison of a picture taken with each of the three phones:

Another short and simple section. Apple offers a 32GB 128GB and 256GB while Samsung only offers a 32GB version. Keep in mind you can upgrade the storage of the Galaxy S7 with a microSD, but this method of storage is far slower than internal storage, making it only good for storing media essentially. Hardcore mobile gamers may want to opt for the higher storage capacity of the Apple iPhone 7 in order to have room for all their apps and games.

Our verdict on storage:

The iPhone 7 is the clear winner in this section, with much larger storage sizes available for those who need it.

Our verdict on battery life:

Another clear win for Samsung. While Apple marginally improved on battery life when compared to the iPhone 6, the Galaxy S7 pulls ahead and provides the charging capacity needed to get through a day of pretty heavy usage.

Our verdict on price:

Apple’s iPhone 7 is the clear winner here. With a less expensive phone that matches the storage of the Samsung Galaxy S7 as well as two options with much larger storage for only $100 more in each increment, the iPhone offers more options and better prices. Both phones are still luxury items, but Apple edges out Samsung in the battle of the prices.

Both phones are extremely powerful and have pros and cons, but for me personally I’d have to go with the Galaxy S7. With a better camera, battery life, display, and more resilient design I think it just edges out the iPhone 7. However, software is Samsung’s downfall and Apple’s strength. For an easier to manage operating system that edges out Samsung on performance, it might be a better idea to go with the iPhone. For me, battery life is a huge concern. Having a phone last all day on one charge is important to me, and is a big reason why Samsung takes the cake.

Practically, there are reasons to go with both. If cutting edge tech and battery life are a concern, go with the Samsung Galaxy S7. If fluid and quick software and a variety of storage options are more important, you should choose the iPhone 7.

My name's Zach and I'm a college student supporting myself with freelance writing as I finish my degree. I largely focus on technology news and reviews for LoadTheGame, though I do report on games from time to time.
@zr566762
Previous Lessons that New Games Can Learn from the Classics
Next Warhammer 40,000: Sanctus Reach Released