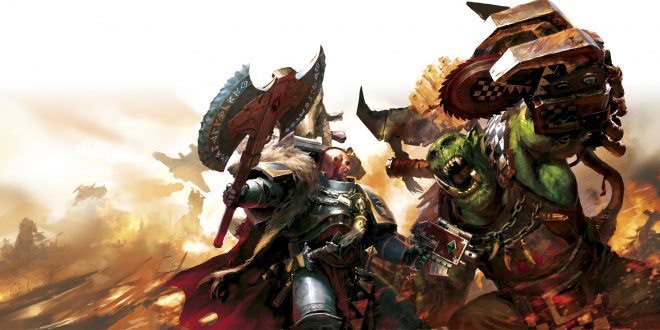 I’ve said this before, but there are so many Warhammer 40k games out that you can trip over them. Dozens of them are out, Deathwing, Battlefleet Gothic: Armada, and Eternal Crusade being as recently released as 2016. There doesn’t seem to be any stop to the massive influx of Warhammer 40k games either. The long awaited Dawn of War III is planned for a 2017 release, along with the lesser known Inquisitor – Martyr. Neither of these games have specified dates, but smaller 40k games seem to filling the wait. For Warhammer 40,000: Sanctus Reach has just been released on Steam.

Sanctus Reach focuses mainly on the Space Wolves, something that will no doubt relive those who feel Ultramarines are overexposed. It is set on the planet Alaric Prime, with them fighting the classic 40k enemy, Orks. Sanctus Reach is a turn based strategy came, similar to XCOM, with the player facing off against an army of alien warriors. Alaric Prime is a Knight World, meaning the Space Wolves will also have backup from Imperial Knights. In other words, players will have giant mocha to play with. Two campaigns are included, chronically the Space Wolves’ battle for the fate of the planet.

Like many games nowadays, Sanctus Reach comes with more than a simple single player mode. Skirmish mode, editor mode and multiplayer will all be induced. They’re, for the most part, exactly what they sound like. Skirmish mode will permit players to create a custom battle to enjoy, and multiplayer will allow two people to go head to head. Editor mode is a little different in that it enables players to create their own battlefield, but isn’t too radical of a change. Sanctus Reach is currently live on Steam, and has a price tag of thirty dollars.

A life long game and half life long writer, David always sought to combine his passions and write about games online.
Previous Samsung Galaxy S7 Vs Apple iPhone 7 – Which Smartphone Comes Out On Top?
Next Vine Shuts Down Today. Export Your Vines Before It’s Too Late!