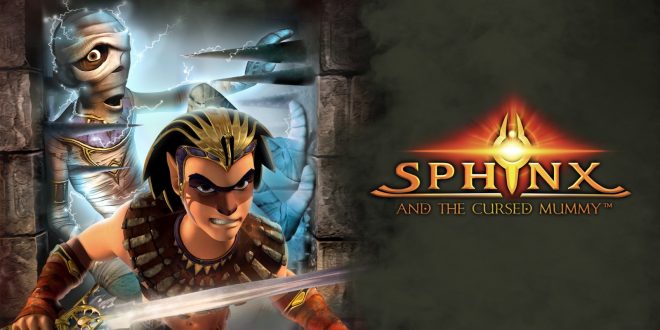 Gamers of a certain vintage may recall the original release of Sphinx and the Cursed Mummy, the Ancient Egyptian adventure ride which was released on second generation consoles back in November 2003.

Many years have passed but the cult status of the game remains as strong as ever, and that is one of the reasons why it has been rejigged and remastered for Nintendo Switch by THQ Nordic.

The concept remains the same: players take on the dual role of the Sphinx, a brave warrior renowned for his skills in combat, and the ‘cursed mummy’, otherwise known as Tutankhamen. This bandaged badass is a master of puzzle-solving and between them, the pair are tasked with retrieving the Blade of Osiris, a sword of legendary powers and standing.

They are led by their master Horus to Uruk, which is otherwise known as the ‘Land of Darkness’, a point presumably covered up the tourist board there.

Sadly, and spoiler alert, something terrible happens to Horus, and a subsequent rumpus sees Sphinx enlist the help of Prince Tutankhamen – transformed by his evil brother Akhenaten into a cursed mummy, as they both seek redemption on those that have hurt them.

The storyline is engaging and captivating, but how does the game itself play?

This is a fun, semi-open-world adventure where you have huge maps to explore, running into battles with the duo’s enemies along the way. The weapon enhancements process is rewarding, and there is a genuine feeling of satisfaction when you upgrade your weapon to the next level of carnage-causing power.

As for Tutankhamen, he is your guide through the game’s myriad of puzzles and obstacles. These range in complexity from the straightforward to the downright difficult, and while they are mostly enjoyable to solve you may at times find yourself searching Google for the answers so you can move onto the next section in good time.

The Ancient Egyptian era has been well represented in gaming, from the re-working of Hollywood movie franchises and the likes of Iron Galaxy’s fighting game Killer Instinct to the all-action The Mummy slot games from the developer Playtech. All of these titles call upon similar points of reference for their graphics, and it’s a format that works well in Sphinx, too.

Indeed, this new release for the brand adds a nice High Definition sheen to the visuals from the old Playstation 2 outing, and while some of the frustrations of that title – particularly the camera, which is slow to catch up with your characters’ movement at times – remain present, this is a worthy new release that adds to the Sphinx and the Cursed Mummy lineage while bringing an exciting adventure for newcomers to the series to enjoy.

And with a 10+ certificate, this is all-ages fun that won’t have anyone calling out for their mummy in the middle of the night…

I’m Load The Game’s co-founder and community manager, and whenever I’m not answering questions on social media platforms, I spend my time digging up the latest news and rumors and writing them up. That’s not to say I’m all work and no fun, not at all. If my spare time allows it, I like to engage in some good old fashioned online carnage. If it’s an MMO with swords and lots of PvP, I’m most likely in it. Oh, and if you’re looking to pick a fight in Tekken or Mortal Kombat, I’ll be more than happy to assist! Connect with me by email markjudge (@) loadthegame.com only
@@MarkJudgeLTG
Previous Call Of Duty 2019 Reveal Imminent As Game’s Social Media Goes Dark
Next Marvel’s Avengers Game Details Leak; Includes Singleplayer and Co-op Gameplay