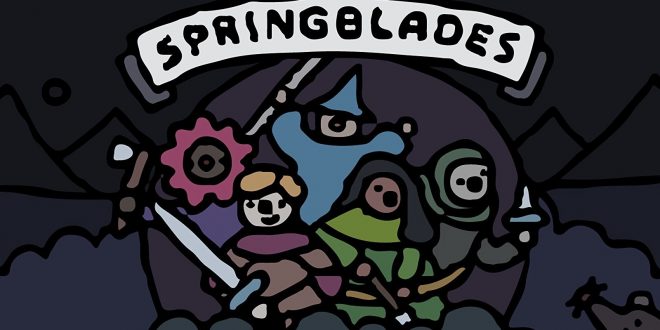 Sokpop Collective, an independent game development studio, is preparing to release their 100th title in December after working together for more than six years. Reaching that goal signifies the group’s decision to modify their business practices and Patreon. They won’t be trying to put out a new game every month. However, Sokpop has recommitted to publishing another 100 games, so they’ll continue to astonish us with new diversionaries like the card game Stacklands or the adorable RTS King Pins. Below is a trailer for their most recent release, the action role-playing game Springblades.

Springblades is the 99th game created by the Sockpop Collective.
The team’s 100th game is being developed by all four Sokpop developers, Aran Koning, Tijmen Tio, Tom van den Boogaart, and Ruben Naus. The game’s release was originally scheduled for November but was moved to December. Even though the game hasn’t yet been released and we don’t know what it will be, it’s now anticipated to debut in December because Sokpop claims to be a little overworked. However, they are close to achieving their objective of creating 100 games, so congratulations to them. According to Sokpop, they still intend to release several games annually and believe the modifications they’re planned will enable them to create “even larger and better” things.

The group claimed that the modifications would give them the chance to produce “higher quality games with more aftercare.” They also anticipate being able to collaborate on projects and provide each of the games they create “deadlines that make more sense” as a result. Sokpop established its collective in 2016, and since then, they have put out some authentic zingers. They have created games in a variety of genres, including MMOs, card games, and real-time strategy. Rock Paper Sock, a variant of classic Runescape with rock paper scissors, was launched by Sockpop in 2020. Their most recent game, Springblades, is an action role-playing game with numerous outfit changes that give the characters various skills.

For £7/$8/€8, Springblades is now available on Steam and itch.io. More information on Sokpop’s 100th game and their future plans is available here.

Old-school gamer with a cheeky tongue that gets me in trouble. When I'm not playing games, I'm writing about them, preferably in the vicinity of a fridge! Oh, and if you're a Justin Bieber fan, I'm afraid we can't be friends!
Previous The PS5 file size for Need for Speed Unbound leaves plenty of space in the garage
Next The Kickstarter goal for Heroes of Might and Magic III: The Board Game was exceeded by 6,000%