Breaking News
Home » GAME TRAILERS » The Kickstarter goal for Heroes of Might and Magic III: The Board Game was exceeded by 6,000% 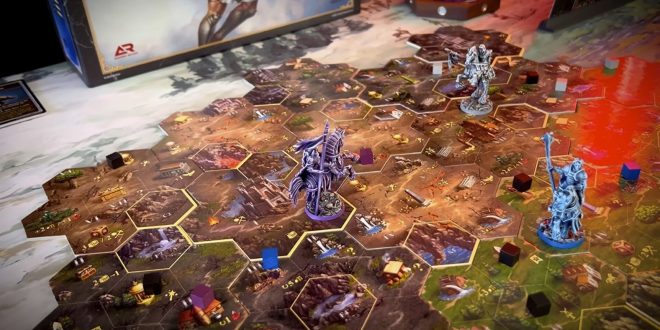 Heroes of Might and Magic III, a vintage RPG, has been turned into a board game, and its Kickstarter campaign has already raised more than 2.6 million pounds. That’s a 6000% increase over the £43,000 fundraising target. All of you desire this. Are you certain that you want it?

The board game combines exploration and competitive deckbuilding, with 1-4 players traveling through an overworld to gather cards to use in various combat engagements. Although I enjoy deckbuilding, I think those who aren’t looking for a nostalgia trip would find this to be a little less magical.

There’s a lot going on, as the trailer up top shows. You are expanding your town, which enables you to appoint soldiers and buy spells, in addition to moving your hero (of either Might or Magic) around the board. You utilize those in discrete combat encounters, either against opposing players or neutral units, on a battlefield that resembles Summoner Wars and where positioning “matters a lot.”

You may be competing to uncover the Holy Grail, amassing wealth, or trying to occupy the most mines depending on the situation. If you wish to play with four players, there is a special 2v2 option in addition to the solo mode.

Every game should be a little bit different because different players will have different victory conditions, and because map tiles will be placed on the board in various ways, and because I generally support incorporating deckbuilding into other systems that give players a more direct sense of interaction. I’m still dubious, though.

Videogame board game adaptations sometimes falter as a result of trying to replicate complex videogame mechanics that end up feeling more complicated and clunky. You’re usually better off choosing games that are trying to do the same goals but aren’t constrained by the same unrealistic expectations, or games that concentrate on one particular aspect. Check out Summoner Wars; it’s awesome. (There is also a cool, free online version.)

Here, my greatest worry is the inevitable boredom that comes with watching your buddies engage in warfare. If I were playing it with more than one other person, I’d be very cautious.

Having said that, I haven’t played it, and at least some folks who have seem to enjoy it. Here are the guidelines and Adam from WeeklyGameNight’s thoughts on the matter.

The video game Heroes of Might and Magic III was included in our list of the 50 greatest strategy games ever developed. You’ll need to pony up €75 if you want a Kickstarter copy of the board game. You may support it here.

Tags featured Heroes of Might and Magic III: The Board Game

Old-school gamer with a cheeky tongue that gets me in trouble. When I'm not playing games, I'm writing about them, preferably in the vicinity of a fridge! Oh, and if you're a Justin Bieber fan, I'm afraid we can't be friends!
Previous In addition to launching their 100th game, Sokpop Collective hopes to release another 100
Next In Pokémon Scarlet and Violet’s upcoming limited-time Tera Raid Battle, take on Tyranitar or Salamence