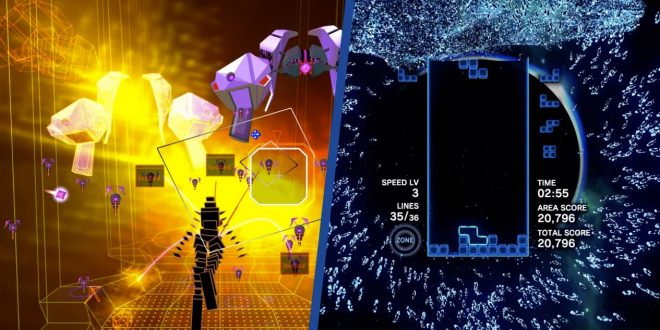 Rez Infinite and Tetris Effect, two of Enhance Games’ games, have been revealed to be coming to the PS5 and PSVR2. These two vaguely rhythmic arcade games will be included in the PSVR2 launch games and will receive current-gen updates.

To quickly review: In Rez Infinite, which is essentially a remaster of the legendary PS2 game, you fly through cyberspace while shooting enemies to the beat of an electronic soundtrack. Additionally, it has a brand-new area called Area X that promotes greater mobility and some exciting encounters. Tetris Effect, on the other hand, is the familiar and beloved game with a gorgeously vibrant makeover and a soundtrack that seamlessly blends into the action.

Both games are fantastic whether played in VR or on a flat-screen, but we anticipate the PSVR2 versions of these will be incredible. You can upgrade either of these games from the PS4/PSVR versions to the PS5/PSVR2 versions for a reasonable $9.99.

They add to the nearly 40 PSVR2 games that were included in the launch lineup, which is crazy. Will you be unwinding with these two surreal games on PS5 and VR2?

Old-school gamer with a cheeky tongue that gets me in trouble. When I'm not playing games, I'm writing about them, preferably in the vicinity of a fridge! Oh, and if you're a Justin Bieber fan, I'm afraid we can't be friends!
Previous Turn-Based Mystery RPG Came Upon Us Unexpectedly And It Looks Exceptionally Brilliant
Next 37 PSVR2 Games Are Confirmed for the Launch Window, According to Sony’s Complete List