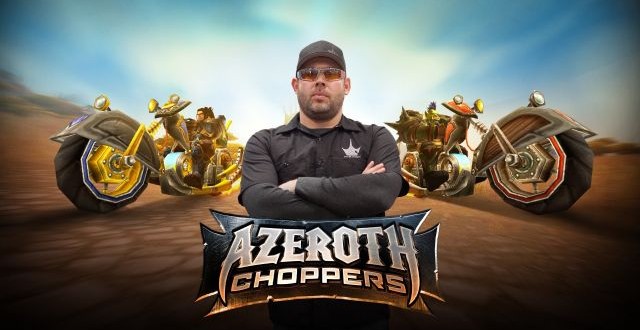 Well, that just happened.  A World of Warcraft and American Chopper collaboration isn’t exactly the kind of thing you’d expect to hear about on a daily basis. To say that the announcement surprised pretty much everyone would be putting it mildly.

Azeroth Choppers is an upcoming webseries that has two teams of bike experts competing to see which one of them can create the best custom designed chopper inspired by the two World of Warcraft factions. The teams are hand-picked by American Choppers star Paul Jr. himself and will be fighting in a head-to-head match-up in order to win the most player votes. The winning team will have their design be made into a faction specific mount that will be available for free only to Horde or Alliance players, depending on who wins.

Aside from the chopper building teams, Blizzard also has their own two teams consisting of:

The series will be kicking off next week with the first episode scheduled for Thursday, the 17th of April and will feature a total of eight episodes according to Blizzard’s website. For more information check out the original post on Battle.net.

I’m Load The Game’s co-founder and community manager, and whenever I’m not answering questions on social media platforms, I spend my time digging up the latest news and rumors and writing them up. That’s not to say I’m all work and no fun, not at all. If my spare time allows it, I like to engage in some good old fashioned online carnage. If it’s an MMO with swords and lots of PvP, I’m most likely in it. Oh, and if you’re looking to pick a fight in Tekken or Mortal Kombat, I’ll be more than happy to assist! Connect with me by email markjudge (@) loadthegame.com only
@@MarkJudgeLTG
Previous Top 10 Best Free or Paid MMORPGs
Next First Star Citizen gameplay footage revealed at Pax East