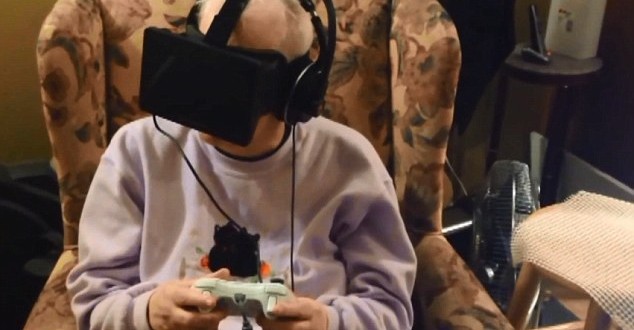 You’ve probably heard a lot about the ever increasingly popular virtual reality headset. Although the device was initially intended for gaming we keep hearing about new possible uses for it. I’ve stumbled upon an article on The Rift Arcade that tells an interesting story about the Oculus Rift. Roberta Firstenberg was an elderly woman that was diagnosed with terminal cancer at the end of 2013. The disease weakened the old woman up to the point that she was unable to walk outside and tend to her garden, one of her favorite pastimes. Fortunately Roberta’s granddaughter Priscilla was there to help her out.

Priscilla, who is a video game artist was debating next-generation consoles with her co-workers one day when she figured out a way to help her grandmother.  “As I brought up more points about the Rift, it suddenly clicked – there might as well have been a literal light bulb above my head – traveling, going outside, just sitting in a chair, etc. That night I went out on a limb and emailed the support center for the Oculus Rift.”

Kevin Crawford, Oculus’s Customer Service Lead responded the very next day with an email of his own, promising to send an Oculus Rift in the direction of Roberta. After the Oculus Rift Dev Kit 1 arrived Priscilla loaded up the Tuscany demo and began filming her grandmother’s reaction as she was “walking” outside.

Roberta used the Oculus Rift for a few more weeks after that. Priscilla even found a way to allow her grandmother to explore using Google Street View and was working on an unique VR experience for her. Unfortunately Roberta lost the battle with cancer and passed away just four weeks later and the project was cancelled.

I’m Load The Game’s co-founder and community manager, and whenever I’m not answering questions on social media platforms, I spend my time digging up the latest news and rumors and writing them up. That’s not to say I’m all work and no fun, not at all. If my spare time allows it, I like to engage in some good old fashioned online carnage. If it’s an MMO with swords and lots of PvP, I’m most likely in it. Oh, and if you’re looking to pick a fight in Tekken or Mortal Kombat, I’ll be more than happy to assist! Connect with me by email markjudge (@) loadthegame.com only
@@MarkJudgeLTG
Previous LG G3 needs an early release in order to be competitive
Next Samsung Galaxy Grand Duos vs. Samsung Galaxy Core – Price and Specs comparison