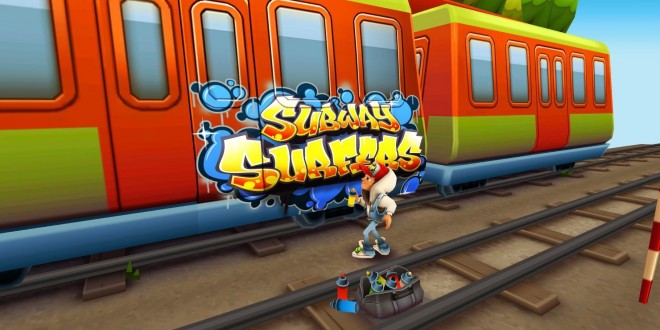 Subway Surfers vs. Temple Run 2 – Who will finish first?

When it comes to endless running type games, Temple Run 2 already made a name for itself. Subway Surfers, although being a newcomer, already has a huge supporting crowd behind it. Both games have the same game objective: run as far as you can by overcoming obstacles and collecting as many coins as possible. It may look simple but it’s hard to accomplish. Which one of them is worthy of stealing your spare time and making you an addict?  Let’s take a look.

The setting of Temple Run 2 is different from its predecessor but maintains the Indiana Jones like atmosphere. The scenery of the second game is not as repetitive and it has a faster pace making it more interesting and varied. You control your character exactly like in the previous installment, by swiping the screen left and right to turn, or up and down to jump or slide under obstacles. To maneuver your character into the path of coins you have to tilt your device. Your character will accelerate on his own over time.

This makes the game quite difficult, forcing you to concentrate not only on the next turn or obstacle but also on collecting as many coins as possible. These obstacles include sharp turns, waterfalls, mine tracks, zip-lines and jets of fire. Coins can unlock new power-ups, characters and character abilities for you. These power-ups can help you survive longer by activating a protecting shield, propel you forward at super speeds or draw all coins toward you like a magnet. You also need to plan out what abilities you will invest in first.

The other thing to keep an eye out for while running is gems. Gems can resurrect you if you die without any penalties but it will double the demand of gems needed for this action every time you use it.

Unlike Temple Run 2, Subway Surfers is more flashy and full of color. It may be more appealing to the younger generation but others may find it enjoyable too. It’s pretty identical in terms of gameplay to Temple Run 2. Subway Surfers ha one major drawback however, it’s not well optimized for all tablets and smartphones but may be still playable.

The setting of the game is more modern than Temple Run 2. Here the protagonists of the game are teenage kids who spend their time by spraying graffiti on the walls. The game kicks into and endless running scenario when the policeman and his dog try to catch them. Not as epic as stealing an ancient artifact if you ask me. It has the same controls as Temple Run but you will only have to worry about the swiping movements. You’ll have to dodge trains and collect coins or items while keeping as much distance as possible from the fuzz. One of these items that can come in handy is the hoverboard. It will help you jump between moving cars or trains and put some distance between you and your chaser. Super Sneakers will allow you to jump higher, Jetpacks will make you fly over the tracks and Coin Magnets will draw all coins in your direction.

As with temple run you can unlock new characters and power-ups as you progress and collect more and more points. The game also features special missions can be completed to increase your multiplier. When the multiplier reaches x30 you gain a Super Mystery Box. These boxes contain items, boosts or coins that will aid you greatly in game. As the game progresses these challenges become harder to accomplish.

There’s really no telling which one you will prefer most. If you want a more hardcore experience, then Temple Run 2 is perfect for you. It’s much more unforgiving than Subway Surfers, and when you make a mistake you die. Subway Surfers is a more casual game and it’s enjoyable for everybody. Of course there’s nothing keeping you from playing both if you fancy and maybe that’s the best thing about these games. Both games offer the chance to pay for in-game items, power-ups or characters, but in my opinion the challenge of unlocking things yourself is much more rewarding.

Tech enthusiast and RPG gamer, I've been surrounded by technology and PC hardware my entire life. I'm fascinated by anything mobile, and when I'm not tinkering with some newly released gadget, I love to immerse myself in the epic tales of Role Playing Games.
Previous BlizzCon 2014 date has been announced, along with ticket prices
Next LG G2 vs Google Nexus 5 – Sibling rivalry