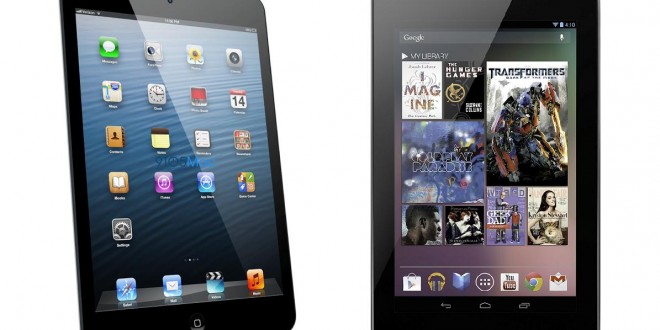 If you are looking for a good compact tablet for everyday web-surfing and casual gaming you might want to consider two of the top contenders: the iPad mini with Retina display and the Google Nexus 7. Offering top performance in a compact package, these two fit the bill perfectly. Both of them are well made, high-end devices from respected manufacturers. So which one should it be? We will try to answer that question in our comparison bellow.

The iPad mini Retina’s design is similar to the first iPad mini’s. With a minimalist look, rounded corners and aluminum body the iPad mini 2 feels like a real premium device. One very practical feature of the iPad mini Retina is its thumb cancellation. It means that if part of your thumb is resting on the screen it won’t be recognized as a touch.

As its name suggest, the iPad mini 2 comes with Apple’s famous Retina display. Spanning 7.9-inches the screen comes with 2048×1536 resolution and a pixel density of 326ppi. Apple’s Retina displays are LCD screens with such a high pixel density that the human eye is unable to distinguish between individual pixels at a typical viewing distance.

The iPad mini Retina comes with a 5MP main camera with all the common features like touch focus, HDR, Geo-tagging, face detection and autofocus. It can also record 1080p resolution videos. The iPad mini is equipped with a 1.2MP front camera for video calls and it’s capable of 720p video recordings.

The iPad mini Retina ships with iOS 7 but is upgradable to iOS 7.1, giving you access to a huge library of apps via the Apple App Sore. iOS 7.1 is stable and easy to use with a multitude of app and features. Like with previous iOS devices, the iPad mini Retina can sync content with a Mac or PC trough iTunes.

With its huge 6471mAh battery the iPad mini Retina should keep running for up to 10 hours or even more depending on usage. Not bad if you want to use your pad all day and don’t want to bring your wall-charger.

The second generation of the Nexus 7 got released on the 26th of July, 2013. Manufactured by Asus, the new Nexus 7 came out with Android 4.3, the first device to ship with this version. The Nexus 7 (2013) got a brand new processor, more RAM and a better screen.

The Nexus 7 is made out of a durable plastic shell with a matte back. It’s lighter and thinner than its predecessor with a slimmer bezel on it’s sides, making the screen stand out more. The top and bottom bezel got unchanged and it might look a bit too thick but you will need the extra thumb-room from accidentally touching the screen.

The new Nexus 7 comes with a 7-inch display, capable of 1920×1200 resolution and 323ppi. Although the Nexus 7’s screen has a lower resolution, its pixel density comes really close to the iPad mini’s Retina display.

Unlike the first Nexus, the new model includes a 5MP rear camera, useful for some casual shooting when you don’t have something better close by.  The front facing 1.2MP camera mainly used for video calls does its job well.

Originally the Nexus 7 (2013) shipped with Android 4.3 Jelly Bean. The new Android 4.4.3 update is rolling out for the Nexus 7 right now, further ensuring its compatibility and top position.

The 3950mAh battery, according to Google, should last up to 9 hours. This depends largely on usage and screen brightness. Even if the Nexus 7 won’t last 9 hours it should still get you through the day with moderate usage.

Looking at the specifications of the two tablets the iPad mini Retina might have more going for it. Having a better and bigger screen and a more elegant design, the iPad mini might be considered the winner out of the two, but if we add prices to the mix, things change in favor of the Nexus 7.

You can buy a Nexus 7 16GB Wi-Fi for as low as $230, while the 32GB LTE model would set you back around $350. The iPad mini Retina will cost you around $300 for the 16GB Wi-Fi only version and $530 for the 16GB LTE version. As you can see, price is a big factor here. If you are a fan of Apple and the iOS then the iPad mini with Retina display is the perfect choice between the two. If you don’t care much about the iOS and want a good compact tablet for daily use without breaking your budget, then the Nexus 7 will do just fine and will be come the tablet of choice.

Tech enthusiast and RPG gamer, I've been surrounded by technology and PC hardware my entire life. I'm fascinated by anything mobile, and when I'm not tinkering with some newly released gadget, I love to immerse myself in the epic tales of Role Playing Games.
Previous MiiPC. Would you exchange your Windows computer for Android?
Next Dark Souls 2 PC available on Steam soon