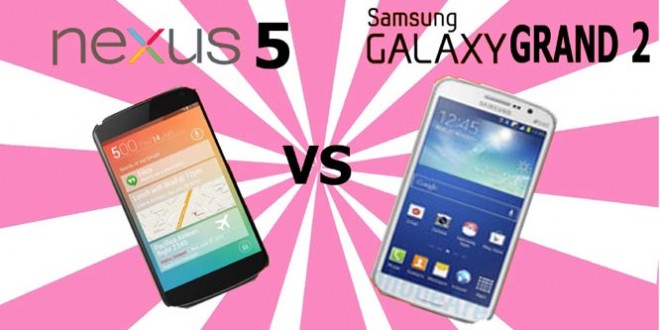 Released back in October 2013, the LG Google Nexus 5 quickly became  popular because of its general good specs and affordability. The device is considered to be the best in its price range, on the other hand the Samsung Galaxy Grand 2 comes at a pretty high cost. Samsung is known for releasing high-end quality smartphones but is a Grand 2 purchase justified when handsets like the Nexus 5 are also available on the market? That’s what we’re trying to find out.

The Galaxy Grand 2 may not be one of the best devices out there but considering Samsung’s reputation we figured it’s worth taking a look to see what it has to offer. The smartphone comes equipped with a 5.2-inch display that features a 720 x 1280 resolution with 280 pixel density. Right off the bat we can see that the display is not up to par with other devices currently available on the market but it’s not horrible either.

Spec-wise, we’re looking at a Qualcomm Snapdragon 400 quad-core processor running at 1.2 Ghz, 8 GB internal storage memory and 1.5 GB RAM. The device also offers a microSD card slot that allows for up to 64 GB of additional storage. However, the main feature here comes in the form of its dual micro SIM slots option with dual standby capability.

Samsung Galaxy Grand 2 includes a decent 8 MP LED rear camera that allows videos to be recorded in 1080p full HD @ 30 fps, and also features face detection, stop motion, and auto-focus. The device’s 2600 mAh removable battery lasts for up to 17 hours of talk time and 370 in stand-by mode and is one of the features that makes it stand out from the competition.

Co-developed by Google and LG, the Nexus 5  is currently one of the most purchased smartphones on the market because of its good price to quality ratio. The device sports a 4.95-inch 1080 x 1920 resolution True HD display and 445 pixel density which offers beautiful and vibrant colors even during outdoor use.

The device also comes equipped with a 8 MP LED rear camera which features a CMOS sensor with optical image stabilization. It’s 2300 mAh non-removable Li-Po battery might not seem as impressive at first glance, but it does last for up to 17 hours of  talk time and up to 300 hours in stand-by mode.

It’s easy to see why so many people prefer the LG Google Nexus 5 over other smartphones. A quick look at the device tells the whole story, and makes the Samsung Galaxy Grand 2 look almost obsolete even though it was released around the same time. Samsung’s device does come with a bigger display, larger battery and more optional storage memory so we’ll give it credit for that at least. However, its overall specifications almost pale in comparison to the Nexus 5 which also comes at a cheaper price, so we’ll have to declare LG Google Nexus 5 the winner of this battle.

I’m Load The Game’s co-founder and community manager, and whenever I’m not answering questions on social media platforms, I spend my time digging up the latest news and rumors and writing them up. That’s not to say I’m all work and no fun, not at all. If my spare time allows it, I like to engage in some good old fashioned online carnage. If it’s an MMO with swords and lots of PvP, I’m most likely in it. Oh, and if you’re looking to pick a fight in Tekken or Mortal Kombat, I’ll be more than happy to assist! Connect with me by email markjudge (@) loadthegame.com only
@@MarkJudgeLTG
Previous iPad Air 2 also gets Touch ID. Are we heading towards exclusive fingerprint recognition?
Next Temple Run 2 Tips & Tricks