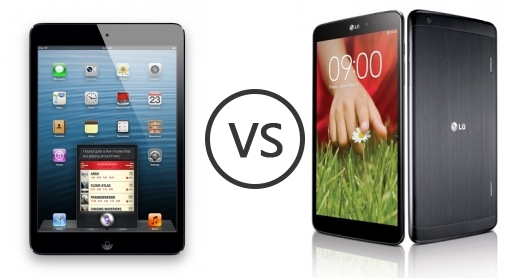 Today we’re taking a look at the iPad mini Retina, also known as iPad mini 2 or iPad mini with Retina display. The multiple named device is known for being one of the best small tablets currently available. Its challenger for this particular battle will be the LG G Pad 8.3, also a popular tablet in its own right. Both are top of the line devices that offer a good bang for the buck, but which one of them is better? Let’s take a look and find out.

The second generation iPad mini tablet has been around since last November and shares many similarities to its predecessor. The tablet created quite the fuss when Apple first announced that the device will feature the same 2048 x 1536 resolution found on bigger iPads. The 324 ppi 7.9-inch panel is a bit smaller than its counterparts, but comes with the already famous Retina display that can also be found on the iPad Air.

The company went all out with the iPad mini Retina and equipped the device with a 64-bit Apple A7 chipset, Cyclone dual-core processor running at 1.3 GHz and 1GB DDR3 RAM. The device comes with 16/32/64/128 GB internal storage options, but doesn’t feature a microSD card slot for additional memory so keep that in mind when choosing a variant.

If you’re interested in connectivity options, it’s good to know that the iPad mini Retina comes in two models, one featuring 4G while the other has WiFi capabilities. Finally, the tablet comes equipped with a massive 23.8 Wh Li-Po battery that can last for up to 10 hours of multimedia use. iPad mini Retina runs on iOS 7 but can be upgraded to use the iOS 7.1.1 operating system.

Our other contender was released around the same time as the iPad mini 2 and is currently the only tablet in the LG G series, which also includes smartphones like the LG G2. Just as its name suggests, the device sports a 8.3-inch IPS LCD display that features 1920 x 1080 resolution and 273 pixel density.

A quick look at the specs reveals that the LG G Pad 8.3 comes equipped with a powerful Qualcomm Snapdragon 600 @ 1.7 GHz quad-core processor. The tablet comes right off the bat with 2 GB of RAM and 16 GB internal storage, and also includes a microSD card slot that allows for up to 64GB additional memory.

Last but not least, the tablet also features WiFi and 4G models for connectivity purposes. LG G Pad 8.3 comes equipped with a 4600 mAh non-removable Li-Po battery that allows for about 7 hours of multimedia use before you need to reach for the charger. The device ships with Android 4.2.2 JellyBean, but can be upgraded to run on the 4.4.2 KitKat operating system.

There can be only one

At first glance, it looks like the iPad mini Retina should clearly win this Apple vs Android tablet battle. The device features a superior display and battery life, which are strong selling points when it comes to tablets. However, another important factor is the price. While the iPad mini Retina can cost anywhere from $400 up to $700 depending on the version, the LG G Pad 8.3 is usually much cheaper and can be bough for about $350-400.

That being said, Apple offers a premium but more expensive product, while LG brings a cheaper one but arguably inferior, although the difference is not that huge. We’ll have to declare the iPad mini Retina the winner because of its overall superior specs and display. But ultimately it all comes down to which operating system you like best so the final decision will be yours.

I’m Load The Game’s co-founder and community manager, and whenever I’m not answering questions on social media platforms, I spend my time digging up the latest news and rumors and writing them up. That’s not to say I’m all work and no fun, not at all. If my spare time allows it, I like to engage in some good old fashioned online carnage. If it’s an MMO with swords and lots of PvP, I’m most likely in it. Oh, and if you’re looking to pick a fight in Tekken or Mortal Kombat, I’ll be more than happy to assist! Connect with me by email markjudge (@) loadthegame.com only
@@MarkJudgeLTG
Previous LG F70 vs. Moto G vs. Alcatel One Touch Idol S – Battle of the budget class
Next LG G3 vs LG G2 – Preparing for a possible upgrade