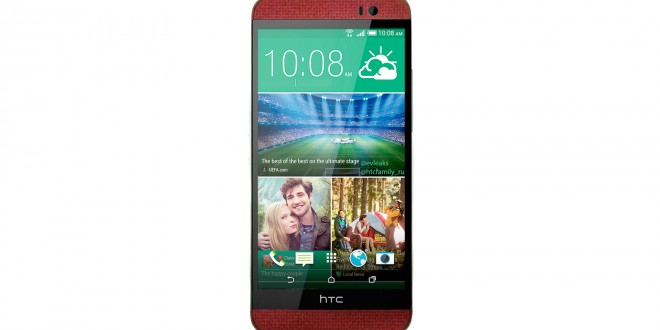 HTC M8 Ace will have beautiful curves, as per leaked image that has popped up on Monday, but HTC also confirms the design on Twitter: “more beautiful curves coming soon”.  The smartphone appears to be red in the image with a curved back panel made of polycarbonate, looking a lot like Moto X by Motorola.

HTC has never mentioned anything official about the design of the next smartphone, but some conclusions can be taken already regarding the screen, resolution, processor and price.  The HTC M8 Ace will have a 5 inch screen and a 1080×1920 resolution; will be powered by a quad core Snapdragon 801 SoC set at 2.5 GHz. What has changed by comparison to the HTC M8 is the flash which was placed higher in the back and the shell, which will change from aluminium to plastic.

The price of the smartphone will be somewhere around 480$. Other rumours have been circulation about its sibling, HTC M8 Prime might have a 5.5 inch screen, QHD resolution and 3 GB RAM. These look like very powerful smartphones and the market is awaiting them impatiently.

HTC M8 Ace was intensively compared to the Samsung S5 smartphone, thing that caused many discussions among HTC and Samsung fans. Although it is highly probable that the Taiwanese company could try to build very similar phones to the ones Samsung is developing, we cannot tell for sure what the new HTC smartphone will be like until it’s announced.

We cannot deny though, that the design and the specifications are very much alike. Also, they both have the same plastic back panel concept.  HTC M8 Ace was also called the HTC One fashion edition and seemingly, the curved designed will be much appreciated.

I’m Load The Game’s co-founder and community manager, and whenever I’m not answering questions on social media platforms, I spend my time digging up the latest news and rumors and writing them up. That’s not to say I’m all work and no fun, not at all. If my spare time allows it, I like to engage in some good old fashioned online carnage. If it’s an MMO with swords and lots of PvP, I’m most likely in it. Oh, and if you’re looking to pick a fight in Tekken or Mortal Kombat, I’ll be more than happy to assist! Connect with me by email markjudge (@) loadthegame.com only
@@MarkJudgeLTG
Previous Samsung Galaxy S4 Mini with HD Voice from AT&T
Next Samsung Galaxy Note 4 will feature a 5.7-inch display