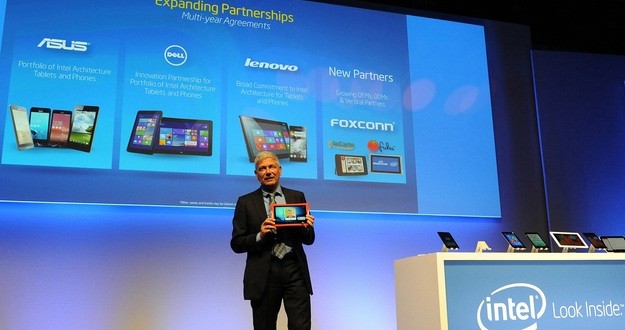 Intel plans to make a great appearance at the upcoming Computex conference with its new processor. Codenamed Moorefield,  the 64-bit processor was specially designed for small Android and Windows tablets. The processor is also known as quad-core Atom Z3560/Z3580, and it’s designed for 8-inch or smaller devices, including smartphones.

An Intel spokeswoman said that Moorefield is different than its predecessor, the “Bay Trail” that powers tablets like ThinkPad 8. The processor comes in a smaller chip package and it runs cooler. The fact that it comes in a smaller chip package means it’s easier to use in 8-inch tablets or in phablets. The spokeswoman also said that the processor is LTE optimized, meaning it includes support for Intel’s XMM 7260 silicon that’s CAT 6 capable. Matching the LTE with their processor in some tablets wasn’t easy, because not many tablets come with built-in LTE. For instance, few Windows 8.1 devices have LTE on board, but Intel managed to squeeze in Moorefield.  Meanwhile, the matching process was easier with Android devices, which come with built-in LTE. Here are Moorefield’s main specifications:

Considering we’re talking about a processor that was specially designed for small Android and Windows devices, Moorefield’s specs are more than satisfying. Compared to one of its rivals, namely the Qualcomm Snapdragon 805, Intel’s new processor does look a bit slack. The Snapdragon 805 comes with 25.6 GB/sec max memory bandwidth and a 1 gigapixel/sec image signal processor, so no doubt which processor is better, if we refer strictly to these two specifications. However, the processor is good enough for 8-inch or less devices, so don’t worry about it. Moorefield worked just fine on KDDI MeMo Pad, as they personally stated, so it should be good for Android devices too.

Intel plans to show off with their new processor and other products at the Computex conference in Taipei, starting on June 4. Even if Moorefield is not the best in class, nor is it as known as its competitors, Intel is making great progress with its latest line of processors. It may not be long until Moorefield will be a common trait in all high-end devices.

I’m Load The Game’s co-founder and community manager, and whenever I’m not answering questions on social media platforms, I spend my time digging up the latest news and rumors and writing them up. That’s not to say I’m all work and no fun, not at all. If my spare time allows it, I like to engage in some good old fashioned online carnage. If it’s an MMO with swords and lots of PvP, I’m most likely in it. Oh, and if you’re looking to pick a fight in Tekken or Mortal Kombat, I’ll be more than happy to assist! Connect with me by email markjudge (@) loadthegame.com only
@@MarkJudgeLTG
Previous GTA V Funny Moments
Next Thermal touch, the AR prototype, will fill up the Google Glass experience!