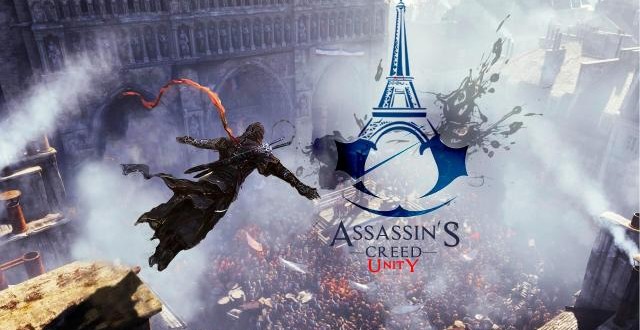 The first Assassin’s Creed Unity poster has made an appearance on Twitter recently. The poster in question wasn’t revealed by Ubisoft, but by a user that goes by the name of CriptAssassini. The image seems to come from Gamestop and gives us a first look at AC Unity’s new main character.

Aside from getting a glimpse of our protagonist’s face, we can also see one of the other characters that will appear in the game. The poster tells us that pre-ordering the game will get us the “Chemical Revolution” mission. This seems fitting as the character we’ve mentioned does seem to look like a chemist. Rumors say that he is in fact Antoine Lavoisier, also known as “The Father of Modern Chemistry”. Not much else we can gather from the picture except that this is supposed to be pre-order offer number two. That means we can probably expect some more DLC to be released at some point in the future.

There aren’t a whole lot of details on Assassin’s Creed Unity at this point. However, we did hear that the next installment in the franchise will take place in Paris during the French Revolution. Also, the game will star a brand new protagonist as we can see from the poster as well. Reports suggest that this new assassin is called Arno and will most likely be a revolutionary. Last but not least, the upcoming game will feature some new parkour mechanics if earlier leaks are to be believed. This information comes from Jesse La Flair, a parkour artist who posted a picture of himself wall-running while working on a “popular video game”. He didn’t actually confirm the game he is working on, but all signs point that it is indeed the latest AC title.

Unity is not the only Assassin’s Creed game currently in development at Ubisoft. Multiple sources claim that the company is also working on Assassin’s Creed Comet. Details about it are very scarce at the moment, but we do know that it will most likely only be available for the Xbox 360 and the PS3. On the other hand, Assassin’s Creed Unity is believed to come out for Xbox One, PS4, and the PC. A release date was not announced yet but the poster does say “Holiday 2014” so we should expect it to come out sometime during Q4. Undoubtedly, the game will be present at E3 2014, which takes place during June 10-12 in Los Angeles. Stay tuned for all the latest news and updates.

I’m Load The Game’s co-founder and community manager, and whenever I’m not answering questions on social media platforms, I spend my time digging up the latest news and rumors and writing them up. That’s not to say I’m all work and no fun, not at all. If my spare time allows it, I like to engage in some good old fashioned online carnage. If it’s an MMO with swords and lots of PvP, I’m most likely in it. Oh, and if you’re looking to pick a fight in Tekken or Mortal Kombat, I’ll be more than happy to assist! Connect with me by email markjudge (@) loadthegame.com only
@@MarkJudgeLTG
Previous HTC W8 to be announced in Q3 2014
Next Homefront 2 trailer coming soon according to insider