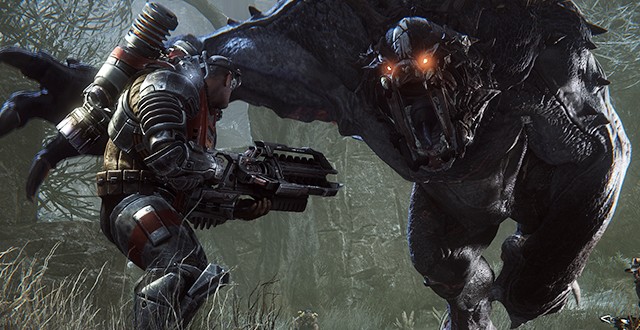 Today during E3 2014 a new gameplay trailer for Evolve was revealed. Evolve is an upcoming co-op action shooter that plays out sort of like a 4v1 PVP. The four attacking players are called Hunters and come in the Assault, Medic, Support, and Trapper varieties. The fifth player will take on the role of the monster and will go up against the Hunters. Up until this point we only knew of one monster type, namely the Goliath. However, thanks to the trailer unveiled during E3 we now know of  a brand new creature class. The video didn’t mention a name for this new monster, but we’ll call him Chthulu for now considering he looks somewhat similar.

The creature seems to posses a range of abilities and powers that’s very different from those used by Goliath. Following this new addition Evolve now features a decent amount of variety for both the Hunters and the creatures. Ok, so there are only two monsters, but this already means that matches can play out in very different ways from one another, which is something the game really needed. Turtle Rock Studios, the creators of Evolve promised that we will get more variety and they delivered. Hopefully, we’ll get to see many more additions in the near future.

Microsoft announced during their E3 press conference that the Beta testing phase for Evolve will first become available for the Xbox One. The company said that their console will also be the first to benefit from the upcoming DLC pack. Pre-ordering the game will grant you the Savage Goliath character skin, as well as the new monster depicted in the trailer for free. Evolve will be released on October 21st and will be available for Xbox One, PS4, and the PC. Stay tuned for more E3-related news and check out the new Evolve trailer below.

I’m Load The Game’s co-founder and community manager, and whenever I’m not answering questions on social media platforms, I spend my time digging up the latest news and rumors and writing them up. That’s not to say I’m all work and no fun, not at all. If my spare time allows it, I like to engage in some good old fashioned online carnage. If it’s an MMO with swords and lots of PvP, I’m most likely in it. Oh, and if you’re looking to pick a fight in Tekken or Mortal Kombat, I’ll be more than happy to assist! Connect with me by email markjudge (@) loadthegame.com only
@@MarkJudgeLTG
Previous E3 2014: Call of Duty Advanced Warfare demo looks impressive
Next E3 2014: Halo 5 Guardians Beta Revealed, game launching in 2015