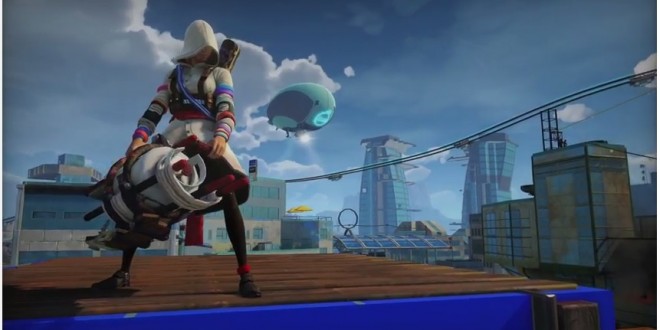 Insomniac Games will allow you to play as a female assassin in the upcoming open-world third-person shooter Sunset Overdrive. A recent video posted by the company on Youtube shows at one point a female character dressed as Ezio Auditore from the Assassin’s Creed series. Earlier this week there were quite a few people upset at Ubisoft because Assassin’s Creed Unity doesn’t feature playable female characters in co-op. They claim that this would require additional development work and at the end of the day it’s not really relevant to Unity. The story of the game revolves around Arno and everybody will play as him, even in the co-op. While Ubisoft’s points are more or less valid this decision stirred up a lot of controversy lately.

On the other hand, Insomniac Games doesn’t have any problems with this whatsoever and will let you customize your character so that you can “be who you wanna be.” Somebody asked the company “Can you play as a female character?” The presenter replied with “Of course. Self-expression is super important to us. You can be female. You can be male. You can be different skin tones. You can be different body types. And all of the clothing is gender neutral. So if you want to be a dude in a skirt, you can be a dude in a skirt. He then references Assassin’s Creed again by adding “Take a stab at it.”

This video will likely start another wave of heated discussions over the next few days. To add even more fuel to the fire, an online petition regarding this issue has surfaced as well. The petition was created in order to express disappointment at the lack of variety in Assassin’s Creed Unity’s co-op mode. “We believe that the Assassin’s Creed series, a franchise with infinite scope, does not reflect the needs of its demographic well enough.” Almost 7.000 people have already signed this petition and the goal is to get 7.500 signatures. Assassin’s Creed 3: Liberation had a female protagonist so maybe we’ll see another one in a future title, but it’s unlikely that Ubisoft will add one for Unity no matter how many complaints they get.

Both Sunset Overdrive and Assassin’s Creed Unity will launch on October 28th. The first will only be available for the Xbox One while the latter will also arrive for the PS4 and the PC in addition to the XB1. Stay tuned for more news and updates.

I’m Load The Game’s co-founder and community manager, and whenever I’m not answering questions on social media platforms, I spend my time digging up the latest news and rumors and writing them up. That’s not to say I’m all work and no fun, not at all. If my spare time allows it, I like to engage in some good old fashioned online carnage. If it’s an MMO with swords and lots of PvP, I’m most likely in it. Oh, and if you’re looking to pick a fight in Tekken or Mortal Kombat, I’ll be more than happy to assist! Connect with me by email markjudge (@) loadthegame.com only
@@MarkJudgeLTG
Previous Sony gives details about the new LittleBigPlanet 3 characters
Next iWatch will reportedly have multiple designs and sensors

Insomniac Games is known for helming some of the most beloved games of the past ...