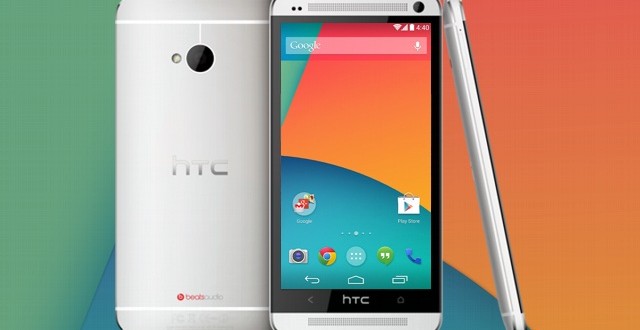 The entire Android 4.4.4 rollout schedule for HTC devices has been leaked recently. Thanks to a document posted on LlabTooFeR we now know that the latest version of the operating system will arrive on the HTC One M8 sometime during July or August. The picture we’ve posted below also reveals that Android 4.4.4 will come with a new Sense 6.0 update and that Android 4.4.3 might be skipped entirely because the latest version is already available. While the update will also arrive on the HTC One M7 during July-August, other devices manufactured by the Taiwanese company will only receive it a bit later

HTC One M8 Dual Sim, HTC One Mini 2, and HTC One E8 will only get Android 4.4.4 + Sense 6.0 sometime during August or September. The document also reveals that the latest update is not scheduled to arrive for HTC’s older devices such as One Dual Sim, One Max, One Mini, Butterfly S, Desire 816, and Desire 610. Furthermore, neither of the devices, old or new will end up upgrading to Android 4.4.3 according to the document. However, the company is planning to evaluate Android L for all of them sometime during October-December. The first devices to receive it will unsurprisingly be the Google Play Edition of the HTC One, both M8 and M7 models. They are also the only HTC devices to already feature Android 4.4.4 availability. 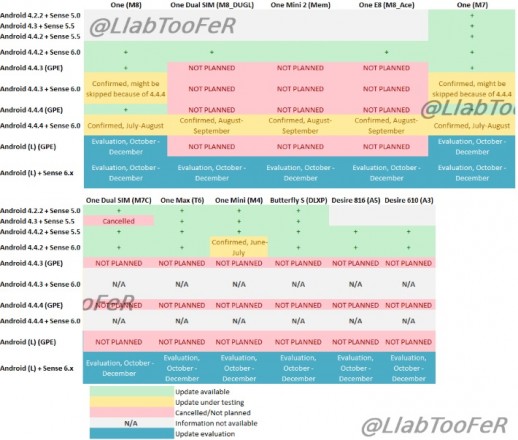 HTC has announced earlier that both One variants will be upgraded to Android L within 90 days of receiving the final build from Google. “HTC is excited about the new features in Android L and we can’t wait to share them with our customers,” the company said in a statement. “We are committed to updating our flagship HTC One family as fast as possible. We will begin rolling out updates to the HTC One (M8) and HTC One (M7) in regions worldwide within 90 days of receiving final software from Google, followed shortly thereafter by other One family members and select devices.”

While it may take a while until Android L will be available for the M8 and M7, you can already check it out if you happen to own a Nexus 5 or Nexus 7 (2013). Google has released a developer preview of their upcoming operating system and you can grab it from the official website. Keep in mind though that this version is targeted at developers and average users might have some problems running it. Stay tuned as we bring you all the latest news and updates.

I’m Load The Game’s co-founder and community manager, and whenever I’m not answering questions on social media platforms, I spend my time digging up the latest news and rumors and writing them up. That’s not to say I’m all work and no fun, not at all. If my spare time allows it, I like to engage in some good old fashioned online carnage. If it’s an MMO with swords and lots of PvP, I’m most likely in it. Oh, and if you’re looking to pick a fight in Tekken or Mortal Kombat, I’ll be more than happy to assist! Connect with me by email markjudge (@) loadthegame.com only
@@MarkJudgeLTG
Previous Facebook is developing a Linkedin rival called [email protected]
Next 343 Industries hiring producer and concept artist for new Halo title