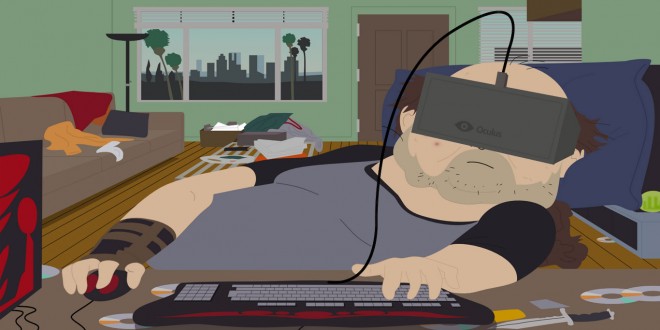 If you’re a South Park fan and own an Oculus Rift we have some very good news for you. The folks over at Tool have recreated the Colorado mountain town along with all of your favorite characters and you can already start exploring it. The team was inspired by South Park: The Stick of Truth and the TV Show’s season 17 intro when creating the simulation. All the characters and buildings are 2D just like in the popular show, which makes you feel like you’re really part of the cartoon.

Tool even added an awesome Easter egg to their virtual reality version. Once you step through the church doors, you will begin to “fall” into Hell. Luckily, you can be saved and returned to South Park if you happen to find Saddam Hussein. An interesting thing to note is that you might come across multiple versions of the same character. For example, once you jump in, you’ll likely see Cartman sitting in the bus station next to Stan, Kyle, and Kenny. But if you start exploring a bit, you will also find him somewhere else dressed as a Wizard, just like in South Park: The Stick of Truth.

The team explains that that this project had three main goals. “One, from a tech point of view, to sharpen our Unity and Oculus Rift development skills—two, from a creative point of view, to reimagine a well known story by allowing the user to experience it in the first person and—three, to finish the project in time to share with our friends at the Cannes Lions Advertising Festival.” They also describe in detail some of the technicalities.

“Utilizing Unity’s terrain feature, which would accept shadows and have more dimensionality, we painted up the snow through the streets and sidewalk layers. Working in tandem, the buildings were modeled and UV mapped in C4D, textured in Photoshop, exported as FBX files and added to the scene as they were completed. Additional elements were modeled and textured directly in Unity, such as fences, trees, and basketball goals. We also added the gang’s School Bus and Officer Barbrady’s police car on a set loop. Finally the rest of the 2d sprite characters were added.”

If you want to check out Tool’s South Park re-imagining visit this link and go to the bottom of the page. If you don’t own an Oculus Rift device, don’t worry, the team also provides a browser version.

I’m Load The Game’s co-founder and community manager, and whenever I’m not answering questions on social media platforms, I spend my time digging up the latest news and rumors and writing them up. That’s not to say I’m all work and no fun, not at all. If my spare time allows it, I like to engage in some good old fashioned online carnage. If it’s an MMO with swords and lots of PvP, I’m most likely in it. Oh, and if you’re looking to pick a fight in Tekken or Mortal Kombat, I’ll be more than happy to assist! Connect with me by email markjudge (@) loadthegame.com only
@@MarkJudgeLTG
Previous HTC One M8 and HTC One M7 get Android KitKat 4.4.4 update
Next Battlefield Hardline improved thanks to community feedback