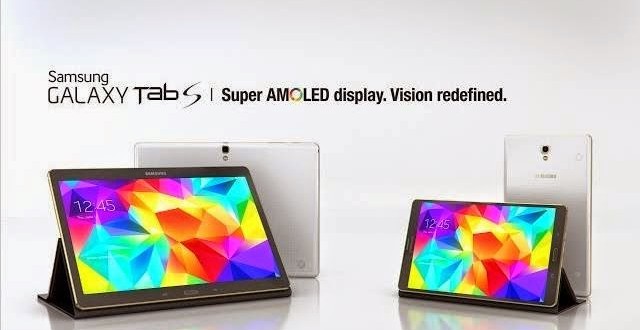 A brand new TV commercial for the Samsung Galaxy Tab S 10.5 tablet was launched today. The commercial’s main goal is to remind us just how great the device’s Super AMOLED display is. The way Samsung is doing this is by comparing its screen with that of a similar tablet, possibly one of Apple’s iPads. During the course the video, the company tries to convince us that the Samsung Galaxy Tab S features the most majestic, breathtaking, rejuvenating, and delectable panel out there. Strange choice of words, but the commercial does its job well, the Super AMOLED display does seem to offer a high level of quality and realism.

The tablet is the first of its kind to come equipped with a high resolution 2560 x 1600 panel. The 10.5-inch variant offers around 288 pixel density while the 8.4-inch Samsung Galaxy Tab S features a grand total of 359 ppi and the same high resolution. But of course, the screen isn’t everything and Samsung knows it well. That’s why they also included some great specs to go along with the beautiful Super AMOLED display. A quick look under the hood of the Galaxy Tab S reveals an Exynos 5 Octa 5420 chipset using two CPUs: a Cortex-A7 quad-core @1.3 GHz and a Cortex-A15 quad-core @1.9 GHz. The tablet comes in 16/32 GB variants with microSD card slot good for up to 128 GB addition internal storage memory. Some other specs include 3GB RAM, 8MP primary camera and 2.1MP seconday shooter, as well as a massive 7.900 mAh battery on the 10.5-inch variant and a smaller, but still impressive 4.900 mAh on the Samsung Galaxy Tab S 8.4. The device runs on the Android 4.4 KitKat operating system.

Younghee Lee, Samsung’s Vice President of Global Marketing, IT and Global Communications bragged quite a bit about the tablet. “There is no other tablet on the market that can compete with the unrivaled viewing experience, innovative design aesthetics, and industry-leading productivity features of the Galaxy Tab S”. And just in case you’re curious, Samsung’s sales pitch for the Galaxy Tab S goes something like this: “We’ve brought the rich, deep and colorful world you see with your eyes to one you can view in your hands. Compared to conventional LCD tablets with about 70% color reproduction rate, the Super AMOLED reproduces colors that match up to more than 90% of nature’s true palette, enabling you to enjoy videos, pictures, and other various contents in their true color.”

The Samsung Galaxy Tab S is priced at $499 for the 10.5-inch variant and $399 for the 8.4-inch model. Both versions are already available for pre-order from Samsung’s stores and will be available for purchase at various U.S. retailers later this month.

I’m Load The Game’s co-founder and community manager, and whenever I’m not answering questions on social media platforms, I spend my time digging up the latest news and rumors and writing them up. That’s not to say I’m all work and no fun, not at all. If my spare time allows it, I like to engage in some good old fashioned online carnage. If it’s an MMO with swords and lots of PvP, I’m most likely in it. Oh, and if you’re looking to pick a fight in Tekken or Mortal Kombat, I’ll be more than happy to assist! Connect with me by email markjudge (@) loadthegame.com only
@@MarkJudgeLTG
Previous Namco Bandai, Slightly Mad Studios partner for Project Cars launch
Next Nexus 5 gets increased battery life thanks to Android L