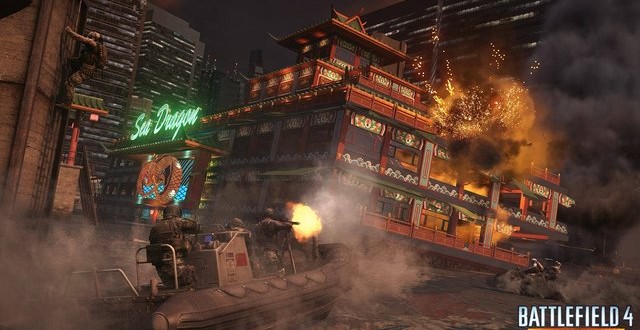 I know Battlefield Hardline is the main attraction right now, but Battlefield 4 is still alive as well and its Dragon’s Teeth DLC is just around the corner. Origin revealed earlier on Twitter that the expansion pack will arrive on July 15th for Premium members. The company may have spilled the beans a little early as the mentioned tweet was later pulled down for some reason. The post sounded something like this: “Save 20% on #BF4 Premium right now, them jump into #DragonsTeeth early on July 15th.” Origin later modified it to read “2 weeks early” instead of “early on July 15th” as you can see below.

The damage was done however and now everybody knows the DLC’s release date, but that’s not such a bad thing right? Obviously the main announcement here was supposed to be that Battlefield 4 Premium is 20% off on Origin. You can now buy this version for just $40 or your regional equivalent. Premium membership has quite a few perks as you can image. One of them comes in the form of the 2 weeks early access to all of the expansions, including Dragon’s Teeth of course. My math skills are pretty rusty but if Premium members get to play it on the 15th and they have two weeks early access than that means the DLC will be released for everyone else on July 29th.

Dragon’s Teeth is still listed as having a “Summer 2014” release date on Origin for some reason. In any case, if you do decide to purchase Battlefield 4 Premium know that it includes the China Rising, Second Assasult, Naval Strike, Dragon’s Teeth, and Final Stand DLCs. The latter is also listed as having a “Summer 2014” release date. We assume this must be a place holder as it seems too early to release another expansion so soon. Aside from DLCs, you will also receive 12 Battlepacks, exclusive double-XP events, personalization options, and priority position in server queues.

As for the DLC itself, Dragon’s Teeth will add a bunch more items to Battlefield 4 as well as a brand new game mode that goes by the name of Chainlink. Some other brand new content includes 4 maps, 5 weapons, 2 gadgets, and eleven assignments. There are also 5 new achievements/trophies if you’re into that kind of thing. Dragon’s Teeth is expected to land on the PS3, PS4, Xbox 360, Xbox One, and the PC on July 15th for Premium members and July 29th for everyone else. Stay tuned for more news and updates.

I’m Load The Game’s co-founder and community manager, and whenever I’m not answering questions on social media platforms, I spend my time digging up the latest news and rumors and writing them up. That’s not to say I’m all work and no fun, not at all. If my spare time allows it, I like to engage in some good old fashioned online carnage. If it’s an MMO with swords and lots of PvP, I’m most likely in it. Oh, and if you’re looking to pick a fight in Tekken or Mortal Kombat, I’ll be more than happy to assist! Connect with me by email markjudge (@) loadthegame.com only
@@MarkJudgeLTG
Previous First real photo of the metallic framed Samsung Galaxy F emerges
Next Sony rumored to be acquiring Crytek soon

Hearthstone is a game that has taken the world by storm. In many ways, it ...