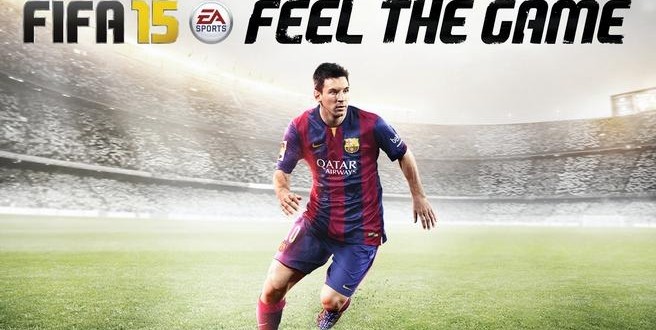 The cover and release date of FIFA 15 has been announced by EA. The title, like the previous two iterations, will feature Lionel Messi on the front cover globally. Each region will receive unique variations based on players from local leagues, but the Barcelona star and Argentina captain will be features across all versions. The publisher confirmed that the game will release September 23 in North America, September 25 in Europe and September 26 in the UK.

EA has already revealed some of the changes they have made to the game. This includes graphical and physics based improvements that will see football pitches deteriorate over time, ultra realistic player models and a new fundamental lighting system. Minor details include the ability for the turf to bo torn up when players slide on the floor while objects on the pitch such as the goalposts and corner flags have more realistic models. The publisher has also modified the way players work on the field, with players remembering events that have occurred in a match. This can then affect their reactions later in the game. This is part of the new ‘emotional intelligence’ system being employed, which will also see crowds react based on how well they believe their team should be doing.

FIFA 15 is the latest instalment in the popular soccer franchise that has yearly release cycle, similar to the Madden series. It will also be the first FIFA title that will release simultaneously on the PlayStation 4, Xbox One, PlayStation 3 and Xbox 360. It is also due to launch on PC, PS Vita and Nintendo 3DS. However, most of the graphical changes will only be able to be experienced fully on the next generation consoles and PC. An Ultimate Edition of the game will also be available to pre-order. This special version of the game gives players 40 gold packs to use in the online trading card game Ultimate Team.

Freelance writer with a love for gaming. Have owned pretty much every console and handheld from the last 15 years. When I'm not writing about games, which I am most of the time, I tend to be reading, writing about sport, binge watching shows on Netflix...or playing the odd video game.
@nathanpgibson
Previous Sony confirms that Project Morpheus will feature PS Vita support
Next iPhone 5s best selling smartphone in 35 countries