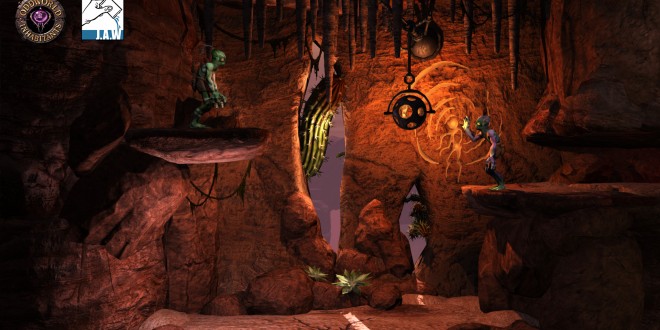 Just Add Water have revealed the pre-order incentives for the upcoming Oddworld: New ‘n’ Tasty. Pre-ordering the game in the United States or Canada will get players access to an extra mission that will release as downloadable content after launch. Those who pre-order will also get a brand new costume to use in-game. For those in other territories, the DLC will be freely available to anyone with a PlayStation Plus account.

Oddworld: New ‘n’ Tasty is a HD remake of Oddworld: Abe’s Oddysee, originally developed by Oddworld Inhabitants. Released in 1997 for PlayStation, DOS and Game Boy it went on to be a critical and commercial success. The positive reception led to two sequels, Abe’s Exoddus for the PlayStation and Munch’s Oddysee on the Xbox in 2001. The gameplay throughout the series focuses on platforming as the player takes control of the protagonist as he attempts to save the enslaved Mudokon. The gameplay involves avoiding obstacles, defeating enemies and managing non-playable characters using a special mind control power.

Rather than just updating the graphics, Oddworld: New ‘n’ Tasty is a full remake of the original game from ground up. It was first announced in 2012 and will see the whole world created in the Unity engine, with full 3D visuals. The publisher has also stated that if they game goes on to sell 250,000 copies it would fund the remake of Abe’s Exodus. Meanwhile 500,000 copies would allow the development team to begin work on the brand new game in the series, likely The Brutal Ballad of Fangus Klot.  The game will release on PlayStation platforms July 22 and will cost $29.99 / €24.99 / £19.99 in each respective territory. Details about the release date on other platforms have not yet been given, but the title is expected to launch on Windows, Mac, Linus, Wii U and Xbox One at some point in 2014.

Freelance writer with a love for gaming. Have owned pretty much every console and handheld from the last 15 years. When I'm not writing about games, which I am most of the time, I tend to be reading, writing about sport, binge watching shows on Netflix...or playing the odd video game.
@nathanpgibson
Previous Oculus cancelling the orders of eBay resellers
Next Star Citizen gets new stretch goal