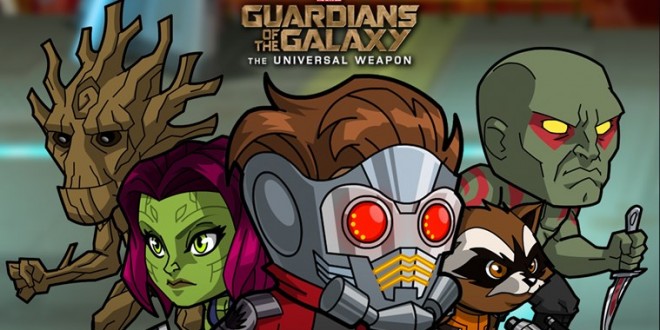 Guardians of the Galaxy game launches on Android, iOS and Windows Phone

Marvel’s Guardians of the Galaxy may very well be the most anticipated movie of the year for many sci-fi fans. The film debuts in theaters on August 1st, but you can already get a first look at all the crazy action today with Guardians of the Galaxy: The Universal Weapon game for Android, iOS, and Windows Phone. The game features 6 worlds, more than 60 levels of real-time combat in Story mode as well as 25 characters from the GOTG universe to unlock and upgrade. You start off as Star Lord, the leader of the gang, and as you progress you will gradually unlock the remaining 24 characters including the other 4 Guardians from the movie: Groot, Drax, Gamora, and Rocket Raccoon.

Guardians of the Galaxy: The Ultimate Weapon doesn’t have the same storyline as the film. Instead, the game offers a “parallel time frame” and is more inspired by the Marvel comics than the upcoming movie. “We started the game before we knew anything about the film, other than the release date,” producer Aaron Norstad told Polygon. “We knew from the beginning that although we were going to strategically plan to launch the same time as the film, we knew that we didn’t want to be the game that was the same storyline as the film. It’s sort of another kind of offshoot of a story that draws references to and from the film, but is different.” A list of key features can be found below.

Guardians of the Galaxy is available for Android, iOS, and Windows Phone devices and can be purchased for the price of $4.99. Stay tuned for more news and updates.

I’m Load The Game’s co-founder and community manager, and whenever I’m not answering questions on social media platforms, I spend my time digging up the latest news and rumors and writing them up. That’s not to say I’m all work and no fun, not at all. If my spare time allows it, I like to engage in some good old fashioned online carnage. If it’s an MMO with swords and lots of PvP, I’m most likely in it. Oh, and if you’re looking to pick a fight in Tekken or Mortal Kombat, I’ll be more than happy to assist! Connect with me by email markjudge (@) loadthegame.com only
@@MarkJudgeLTG
Previous New details on Halo: The Master Chief Collection arriving at Comic-Con 2014
Next The latest Sacred 3 trailer is all about the co-op