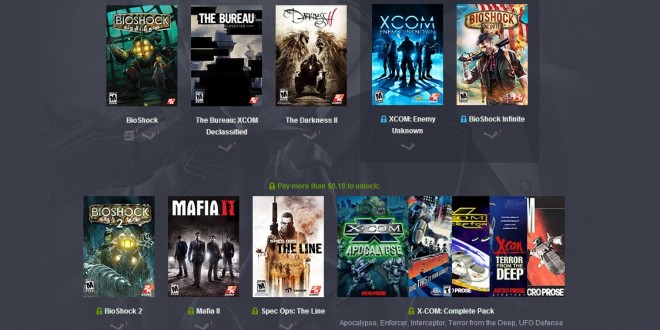 The Humble 2K Bundle has had five new games added to the collection. X-COM Apocalypse, Enforcer, Interceptor, Terror from the Deep and UFO Defense have all been included as part of the X-COM Complete Pack. They are available both as a Steam key or as a DRM-free download for Windows. This brings the total number of X-COM games in the bundle to six, as XCOM: Enemy Unknown was already part of the $20 tier.

The X-COM series is a strategy franchise that focuses on turn-based tactics, with the exception of Enforcer which is a third-person shooter. It began in 1994 with X-COM: UFO Defense and has since gone on to spawn a number of games. The gameplay generally sees players taking control of a military organization as they fund research to develop new technologies. Players can then fight the alien invaders on the ground.  Though the series was essentially cancelled after the release of Enforcer, it was re-booted by 2K games in 2012 with the release of XCOM: Enemy Unknown. Since then there have been a first-person shooter, The Bureau: XCOM Declassified, and an expansion to Enemy Unknown called Enemy Within.

The games are available as part of the ‘beat the average’ tier, which also includes BioShock 2, Mafia II and Spec Ops: The Line. The BTA price currently stands at $8.18.Paying any amount will land you three person shooters in BioShock, The Bureau: XCOM Declassified and The Darkness II. The final tier costs $20 but grants access to the critically acclaimed BioShock Infinite along with XCOM: Enemy Within. All games are available to redeem on Steam if you pay more than $1, while a select number are also available as a DRM-free download. As usual in Humble Bundles, you can choose to split your purchase between the site itself, the developers and the supported charities.

Freelance writer with a love for gaming. Have owned pretty much every console and handheld from the last 15 years. When I'm not writing about games, which I am most of the time, I tend to be reading, writing about sport, binge watching shows on Netflix...or playing the odd video game.
@nathanpgibson
Previous Xbox One sales more than doubled since the Kinect was dropped
Next Assassin’s Creed Unity aims to be historically accurate according to Ubisoft