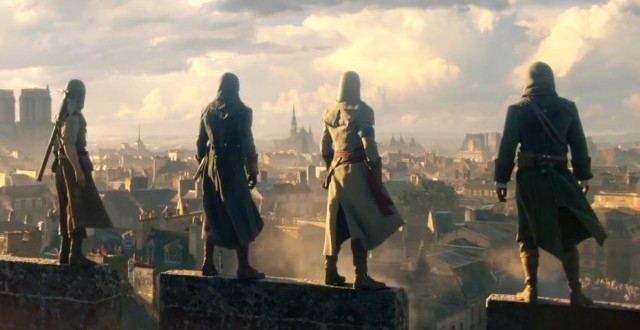 According to Ubisoft, Assassin’s Creed Unity will be a faithful recreation of events that actually occurred, or at least as faithful as you can get in a video game. The latest installment in the series is set during the French Revolution, which took place between 1789-1799. Technically speaking, these events happened fairly recently so they are well documented for the most part. Games™  had an interview with Vincent Pointbriant, senior producer at Ubisoft Montreal and they tried to find out just how historically accurate Assassin’s Creed Unity really is. “History is our playground,” Pointbriant says, “we try to be historically accurate as much as possible so whenever we can find a hole or something that’s not as well documented, we’ll try to exploit it. Otherwise we try to respect history and just suggest things that might have happened to explain it.”

“The French Revolution is a very complex period, there’s no clear winners or losers,” Pointbriant explains. “I mean, and there’s different events during the Revolution that were very complicated to explain, so what we did is that we used the French Revolution as just a background for the main story which is about Arno, a character [who’s role is more passive] than the likes of Forrest Gump. He’s not necessarily involved in beheading the king or any of these things; it just wouldn’t make sense and it wouldn’t feel right. But you’ll see these events that are happening there in the background, and you might be witness to them.”

The producer then goes on to explain just how important player feedback is for the company. In Assassin’s Creed Unity we get to see two of the most highly demanded features: co-op and character customization. Pointbriant also says that Ubisoft is going back to the AC roots with this latest entry and Assassin’s Creed Unity will presumably be a refreshing take on the popular franchise. Furthermore, the game seems to be very refreshing in terms of mechanics as well from the footage we’ve seen. The new style of parkour looks way more agile and interesting than in previous titles. As for historical accuracy, we’ll just have to wait until the game comes out to see if Ubisoft can deliver on their promise.

Assassin’s Creed Unity launches October 28th for the PS4, Xbox One, and the PC. Another AC title presumably called Assassin’s Creed Comet is also currently in the works. This game is being developed for last-gen consoles only and will reportedly have you playing as a Templar that goes by the name of Shay. Ubisoft said more details will come soon and we’ll let you know the moment they do, so make sure you stay tuned.

I’m Load The Game’s co-founder and community manager, and whenever I’m not answering questions on social media platforms, I spend my time digging up the latest news and rumors and writing them up. That’s not to say I’m all work and no fun, not at all. If my spare time allows it, I like to engage in some good old fashioned online carnage. If it’s an MMO with swords and lots of PvP, I’m most likely in it. Oh, and if you’re looking to pick a fight in Tekken or Mortal Kombat, I’ll be more than happy to assist! Connect with me by email markjudge (@) loadthegame.com only
@@MarkJudgeLTG
Previous Humble 2K Bundle gets additional X-COM games
Next Microsoft lagging behind rivals in virtual reality technology