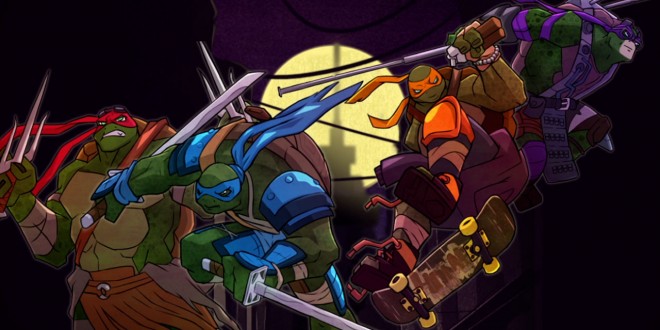 The new Teenage Mutant Ninja Turtles game for Android and iOS has just hit the Google Play Store, perfectly timed with the upcoming TMNT movie! In the game, you pick your favorite turtle, Leonardo, Michelangelo, Donatello or Raphael. You then use swiping to deal with threatening minions acting on Shredder’s orders. TMNT presents itself as an action-packed game, sold at a relatively low price, developed by Nickelodeon. It’s the official mobile game for the TMNT movie and offers intuitive combat controls and complete immersion in the game, especially if you have loved TMNT since your were a kid.

You can jump, punch, spin and kick not just one, but waves of mutants, street gangs, Foot Clan and bosses you remember from the old days. Each turtle is upgrade-able with weapons, attacks, training and fun boosts like the Freak Streak and Whack Attack. You can also enjoy a mini-game, if you are worthy of it, by triggering Turtle Power and fighting with the whole family of turtles. You have two modes to play in, Story Mode, which acts as a prequel to the live action film to be released on August 8th, and Survival Mode and you can compete with  others’ high scores.

Even though the game sounds great, in-app purchases have not been excluded, but can be shut off. The game looks and feels great, sporting nice graphics and smooth gameplay and has a nice comic book feel to it, which may excite your nostalgia receptors.

My life-long dream has been to test out every gadget on the market! Considering the fact that I've rapidly destroyed almost every gadget I've had so far, I'm not inclined to owning something, so my ideal outcome would be to have a different gadget each month. I'm really into smartphones, wearables and tablets and I love Playstation and Xbox, I'm sure I'll beat you at your own game (after a month of training... or two)
Previous Bioware working on horror game, more details at Gamescom
Next Apple OS X 10.10 Yosemite to be released in October alongside Retina MacBook