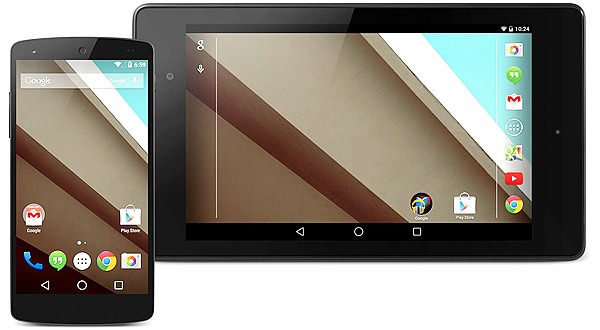 Google Nexus 5, 10, 7 and 4 will get Android L, Motorola and HTC working on two new Nexus models

No, Android Silver doesn’t mean that Google is ready to axe its popular line of Nexus mobile devices. While rumors were circulating earlier this year that Google will be moving away from the Nexus line and focusing on the new Android Silver line, recent reports and denials from Google employees have confirmed that the Nexus line is nowhere near being dead and obsolete. In fact, reports show that Google will be launching the Nexus 9 (a 8.9 inch tablet made by HTC and called Volantis), as well as the Nexus 6 (a 5.9 inch phablet built by Motorola and called Shamu) sometime during late-fall 2014. The Shamu so far has a reported release date set for November.

So what does this mean? Well, first of all, it’s a confirmed fact that both these devices will be used to promote Android L, meaning they will have the new OS installed out of the box. This also means that Android L will become available in November at the latest. Google has confirmed that its flagship products will receive Android L, leaving (hopefully) all the problems of KitKat behind. In other words, we’ll be getting Android L on the Nexus 5, Nexus 4, Nexus 7 and Nexus 10 by November the latest, but more likely by October. While Android KitKat 4.4.3 and 4.4.4 were mostly aimed at security and bug fixes (doing more harm than good on some phones), Android L is a completely different story. The new OS will come with a bunch of additions and improvements, and frankly, we can’t wait to tinker with it.

Material Design is all about looks, and Android will finally get a much needed visual boost, giving those high-end Snapdragons and Adrenos something to work at. Android L will also bring numerous user interface changes (like the lock screen, notification bar, quick settings menu and much, much more). Performance is said to be increased all around, and hopefully we’ll also get rid of all the battery draining bugs and issues of KitKat 4.4.3 and 4.4.4. The OS will land first and foremost on the newest flagship Nexus devices (such as the Nexus 5), and will gradually come out for Google Play Edition phones too, with manufacturers falling in line later on.

Old-school gamer with a cheeky tongue that gets me in trouble. When I'm not playing games, I'm writing about them, preferably in the vicinity of a fridge! Oh, and if you're a Justin Bieber fan, I'm afraid we can't be friends!
Previous HTC expected to reveal the One M8 for Windows in August
Next Mortal Kombat X details will be revealed at Gamescom according to Ed Boon