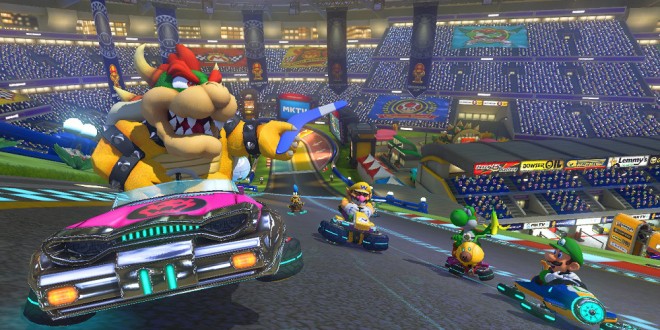 Nintendo has revealed that Mario Kart 8 has so far sold 2.8 million units in total. This brings the game closer to the current best-selling Wii U titles such as New Super Mario Bros. U, which stands at 4 million units sold. Last month we discussed how the game had sold 2 million copies, meaning that around 800,000 have been sold in July alone. This has made it the fastest selling game on the Wii U. The data suggests that Mario Kart 8 is continuing to sell well at retail. Considering that many are likely to pick up the game in winter for Christmas gifts, that number could rise significantly in the coming months. It is still far behind the most popular entry in the series though. Mario Kart Wii eventually went on to sell 35 million units.

The success of Mario Kart 8, which received glowing reviews from critics, has helped to spur on sales of the Wii U itself. Speaking to Polygon in June, Reggie Fils-Aime explained how the title had been driving sales of the console. The Nintendo of America President stated:  “For us, on a global basis, and certainly here in the United States, it’s driving hardware, which is great to see.” While he didn’t go into detail about just how many Wii U’s had been sold as a result of the release of Mario Kart 8, today’s financial information from Nintendo shows that around 500,000 consoles were sold directly due to the game.

Despite the positive news about Mario Kart 8 and the continuing growth of the Wii U, Nintendo has still posted a loss for the first quarter of 2014. The gaming giant made an overall loss of $97.2 million during that time. The company can expect to see further good news in the coming months thanks to the 3DS. Over 44 million copies of portable console have been sold and games such as Pokemon Omega Ruby & Alpha Sapphire and Super Smash Bros. are sure to increase demand.

Freelance writer with a love for gaming. Have owned pretty much every console and handheld from the last 15 years. When I'm not writing about games, which I am most of the time, I tend to be reading, writing about sport, binge watching shows on Netflix...or playing the odd video game.
@nathanpgibson
Previous Tom Clancy’s The Division has you starting your adventure in a Green Zone
Next PlayStation users react angrily to Sony preventing EA Access on their consoles